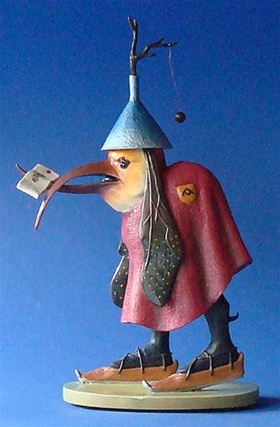 Bird with Letter by Bosch from Temptation of St Anthony, Medium

Bird with Letter Statue by Parastone is a three dimensional representation of the bird figure in the left panel of a religious triptych by Hieronymus Bosch from the Northern Renaissance. The Bird is one of the many freakish figures which appear in The Temptation of Saint Anthony triptych (c. 1500, Museum Nacional de Arte Antiga, Lisbon) which is intended to teach Christian messages to the faithful. Saint Anthony won a lot of praise in Hieronymus Bosch’s heyday because he resisted diabolical temptations, in sharp contrast with the ordinary mortals. This birdlike monster wears skates and a tin hat, has a hunchback, and carries a sealed letter in his beak. The inscription on this note could throw a light on the contemplated symbolism of the beast. But unfortunately, this text is difficult to read and open to various interpretations. none of which are proven to be accurate. The postman-like freak is perhaps delivering a letter to the conspiring figures in the hole under the bridge. The funnel on this curious bird’s head gives him a preposterous appearance. This headwear is referred to elsewhere as wisdom or absent-mindedness, but that symbolism seems unsuitable here.

Hieronymus Bosch (ca. 1450-1519): From an artistic point of view, the world famous brilliant forerunner of surrealism was, in his day, unique and radically different. Hieronymus (Jeroen for short) Bosch was born (ca. 1450-1516) during the transition from the Middle Ages to the Renaissance in s-Hertogenbosch, in the Duchy of Brabant. Bosch places visionary images in a hostile world full of mysticism, with the conviction that the human being, due to its own stupidity and sinfulness has become prey to the devil himself. He holds a mirror to the world with his cerebral irony and magical symbolism, sparing no one. He aims his mocking arrows equally well at the hypocrisy of the clergy as the extravagance of the nobility and the immorality of the people.

Hieronymus Boschs style arises from the tradition of the book illuminations (manuscript illustrations from the Middle Ages). The caricature representation of evil tones down its terrifying implications, but also serves as a defiant warning with a theological basis.

Be the first to review “Bird with Letter by Bosch from Temptation of St Anthony, Medium” Cancel reply