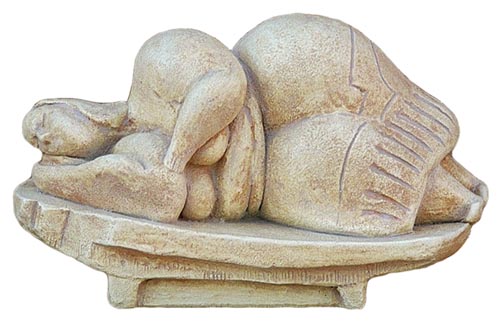 The most spectacular monument in Malta is the enormous, labyrinthine underground sanctuary known as the Hypogeum which may have been the ceremonial center of the island encompassing more than 6,000 square meters in three levels. This catacomb-like structure seems to have been at once temple, tomb and healing center. The main hall leads into the oracle room where two identical small sculptures of a woman were found lying on the floor where they were probably left when the shrine was abandoned. The dreamer is lying on her side on a low couch, one enormous right forearm underneath her head, the other draped across her heavy breast. She is ample-hipped and topless. Dressed in a full length, bell-shaped skirt, she clearly appears to be asleep, almost visibly dreaming. The figures were probably part of a ceremony of dream incubation.

Be the first to review “Dreamer of Malta” Cancel reply