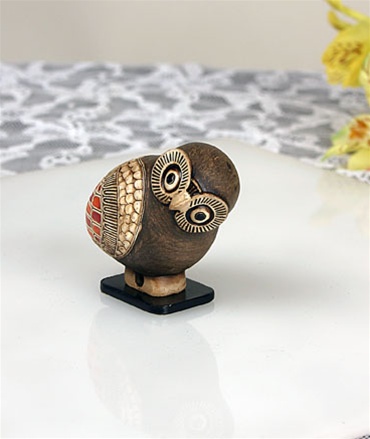 Corinthian Aryballos (650-625 B.C.)
The two preceding centuries of Greek pottery manufacturing had been dominated by Athens geometric style characterized by geometric patters. Due to the resurgence of trade with areas to the east of Greece in the 7th century, Corinth developed its own style for manufacturing pottery which emphasized orientalized details, characterized by the use of plant and animal motifs. During the Late Proto-Corinthian era, potters and decorators specialized in the manufacture of small Aryballoi or flasks for oil or perfume, which were easy to export.

In this reproduction of an ancient Greek aryballos, the basic shape of the owl, emblem of the Goddess Pallas Athena, was created using a mold. The stylized decoration reveals great professionalism and a sense of expression. The aryballos had a hole in bottom at the feet area so that a string could be attached enabling the flask to be hung up. Its owner could then carry it around the perfume bottle at his wrist when visiting the bathhouse for applying a refreshing scent.