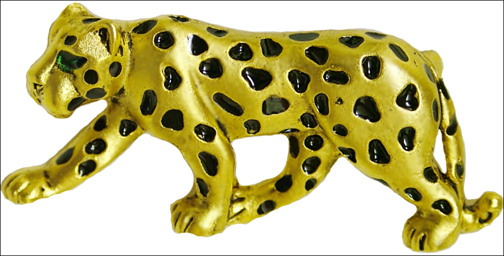 The Jaguar is a member of the cat family (Felidae). Its preferred habitats are usually swamps and wooded regions, but jaguars also live in scrublands and deserts. The jaguar is virtually extinct in the northern part of its original range and survives in reduced numbers only in remote areas of Central and South America; the largest known population exists in the Amazon rain forest.
The Jaguar was considered the master of animals, a creature of the underworld that knows the mysteries of the earth. It represents the moon as well as thunder and rain.

The Jaguar is an animal sacred to the Inca creator deity. It symbolizes learning, skill, and is feared as a self-transformer, sorcerer, and soul-eater.
In Aztec mythology, Tepeyolloti (“heart of the mountains”) was the god of earthquakes, echoes, and Jaguars. He is the god of the Eighth Hour of the Night, and is depicted as a jaguar leaping towards the sun.
Enameled 24 karat gold-plate over pewter.

Be the first to review “Jaguar brooch” Cancel reply