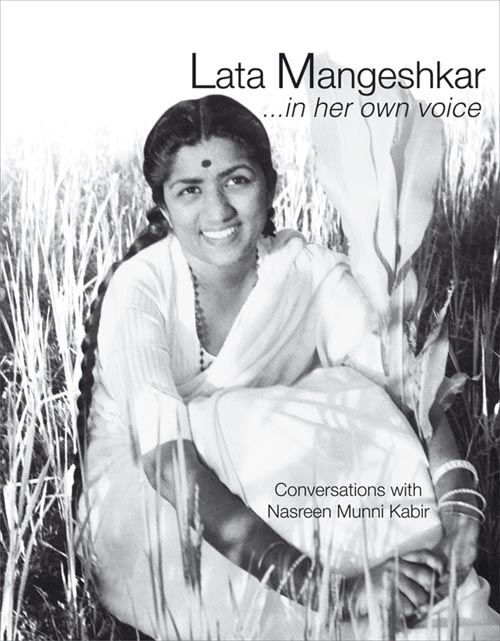 Lata Mangeshkar… in her own voice

Nasreen Munni Kabir is a London-based documentary filmmaker/author who has made several documentaries produced for Channel 4 TV (UK), including Follow that Star (a profile of Amitabh Bachchan, 1989), the series Movie Mahal and The Inner/Outer World of Shah Rukh Khan (2005, Channel 4/Red Chillies). Born in Hyderabad, India, she has also written several books on Hindi cinema, including Guru Dutt, a life in cinema, Talking Films/Talking Songs with Javed Akhtar, and The Immortal Dialogue of Mughal-e-Azam.
She is currently working on a book on Raj KapoorÃƒÂ¢Ã¢â€šÂ¬Ã¢â€žÂ¢s Awaara.

Since 1949, when Lata Mangeshkar was first noticed for her extraordinary singing talent in the Mahal song ÃƒÂ¢Ã¢â€šÂ¬Ã‹Å“Aayega aanewala,ÃƒÂ¢Ã¢â€šÂ¬Ã¢â€žÂ¢ her magical voice has taken a firm hold of the Indian imagination. The tuneful purity and timeless quality of her voice have had a profound impact. For over six decades, as the much loved singer, she has reigned supreme in Indian film music and has been conferred in 2001, the Bharat Ratna, IndiaÃƒÂ¢Ã¢â€šÂ¬Ã¢â€žÂ¢s highest civilian honour.
Lata Mangeshkar has recorded more songs than anyone else in the world and yet, despite her extraordinary fame, she is a deeply private person who has mostly shied away from glitz and glamour.
Lata MangeshkarÃƒÂ¢Ã¢â€šÂ¬Ã‚Â¦in her own voice, a series of fascinating conversations between Lata Mangeshkar and Nasreen Munni Kabir, takes us into the world of IndiaÃƒÂ¢Ã¢â€šÂ¬Ã¢â€žÂ¢s most gifted singer and reveals the person behind the voice that has provided the soundtrack for the lives of billions.