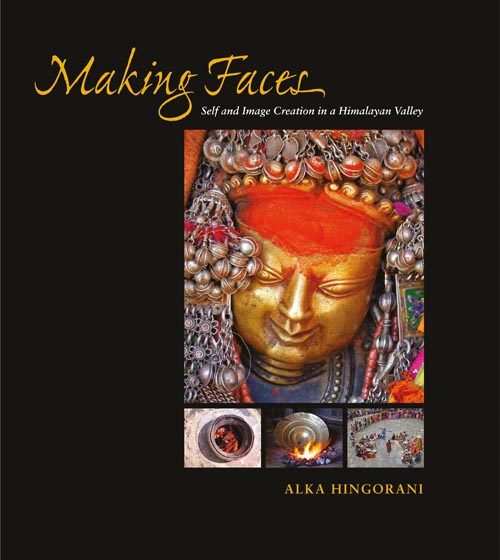 Making Faces: Self and Image Creation in a Himalayan Valley

:
Alka Hingorani is an independent scholar whose interests in Indian art lie geographically in the lower Himalayas and thematically in issues of aesthetics and identity. She holds an advanced degree in photography and a PhD in art history, both from the University of California, Berkeley, where she has also taught as a visiting lecturer. She is an Associate Professor in the Design department at IIT-Bombay.

ABOUT THE BOOK
:
Taberam Soni, Labh Singh, Amar Singh, and other artists live and work in the hill villages of the lower Himalayas in Himachal Pradesh, India. There they fashion face-images of deities (mohras) out of thin sheets of precious metal. Commissioned by upper-caste patrons, the objects are cultural embodiments of divine and earthly kinship. As the artists make the images, they also cross caste boundaries in a part of India where such differences still determine rules of contact and correspondence, proximity and association. Once a mohra has been completed and consecrated, its maker is not permitted to touch it or enter the temple in which it is housed; yet during its creation the artist is sovereign, treated deferentially as he shares living quarters with the high-caste patrons. Making Faces tells the story of these god-makers, the gods they make, and the communities that participate in the creative process and its accompanying rituals. For the author, the process of learning about Himachal, its art and artists, the people who make their home there, involved pursuing itinerant artists across difficult mountainous terrain with few, if any, means of communication between the thinly populated, highaltitude villages. The harsh geography of the region permits scant travel, and the itinerant artisan forms a critical link to the world outside; villages that commission mohras are often populated by a small number of families. Alka Hingorani evokes this world in rich visual and descriptive detail as she explores the ways in which both object and artisan are received and their identities transformed during a period of artistic endeavor. Making Faces is an original and evocative account, superbly illustrated, of the various phases in the lifecycle of a mohra, at different times a religious icon, an art object, and a repository of material wealth in an otherwise subsistence economy. It will be welcomed by scholars and students of anthropology, material culture, religion, art history, and South Asian studies

Be the first to review “Making Faces: Self and Image Creation in a Himalayan Valley” Cancel reply