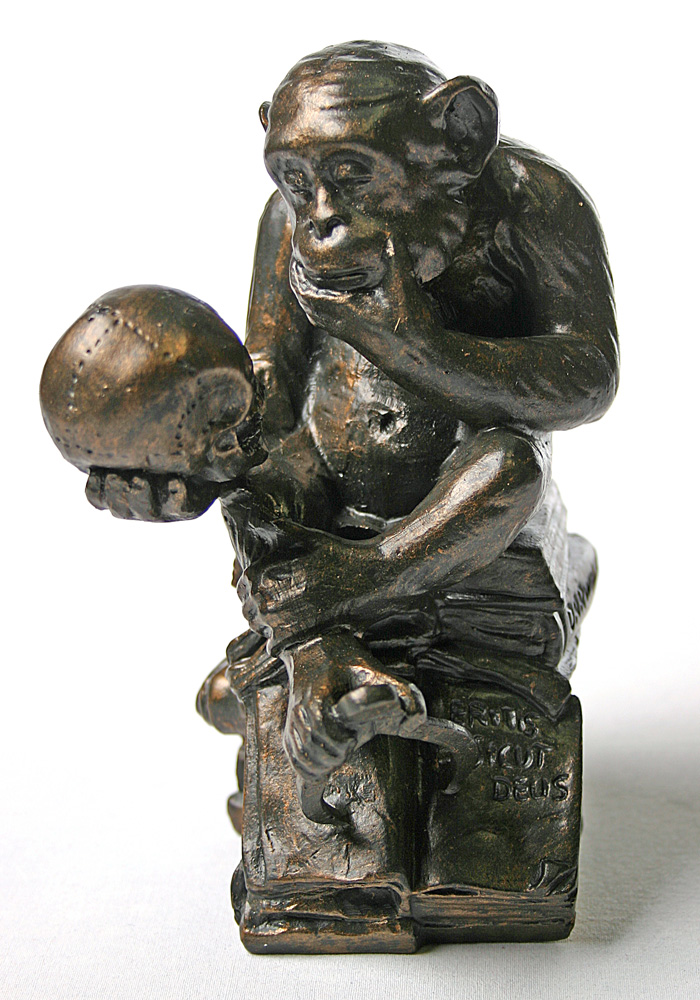 Monkey Holding Skull (Affe mit Schadel, 1892-93):
The small, bronze sculpture ‘Monkey with skull’ or also known as ‘Philosophizing Monkey’ attracted a great deal of attention at the Berlin Art Exhibition in 1893. It was Rheinhold’s first sculpture as a professional sculptor and was an immediate commercial success. The Berlin bronze foundry H. Gladenbeck & Sohn marketed various versions of the adorable monkey. A copy even graced Nikolai Lenin’s desk at the Kremlin from 1922 onwards. One of the books the monkey is seated on bears the Biblical quote: Eritis Sicut Deus (Genesis III, 5). ‘Thou shalt be as God’ which paraphrases the words the serpent spoke to Eve to entice her to taste the apple. Another of the books has the name Darwin, presumably referencing the legendary study by Charles Darwin “On the Origins of Species”.

Wolfgang Hugo Rheinhold (1853-1900)
Hugo Rheinhold was born in 1853 in the Prussian town of Oberlahnstein As the son of the prosperous Jewish trader Rheinhold Seligmann. The name Siligmann was removed from the virth certificate, presumable to protect Hugo from anit-Semitic accusations. In 1874, Rheinhold left for San Francisco to try his luck in international trade. He returned to Germany four years later and married his childhood sweetheart in Hamvurg. When she died after a year, Rheinhold decided to bid trading farewell and moved to Berlin to study philosophy. Rheinhold only decided to become an artist in 1886. After lessons from Max Kruse and Ernst Herter he went to the Berlin Academy of arts. Very little of his work is known. His widely acclaimed magnum opus is Am Wege, a life-size marble sculpture of a saddened mother suckling her child.

Statue reproduction is part of the Parastone Mouseion 3D Collection.