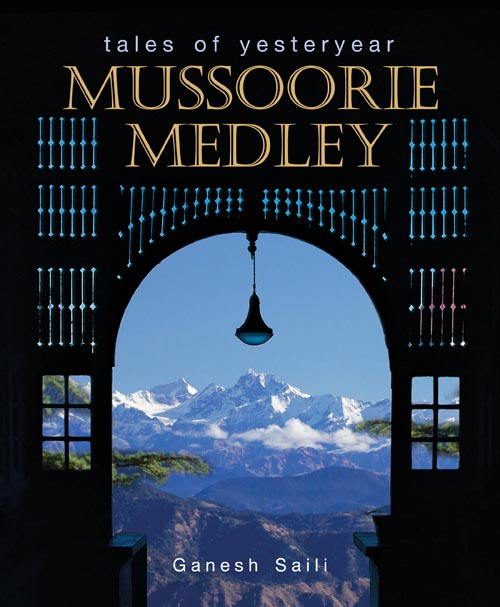 Mussoorie born Ganesh Saili has had a life-long love affair with the Garhwal Himalayas. Settled atop a spur in Landour, he has taught English and American literature at MussoorieÃƒÂ¢Ã¢â€šÂ¬Ã¢â€žÂ¢s post-graduate college. Having had the good fortune of living in the hills, he has seen the changing facets of the hill station. For thirty years and more, he has researched and trekked these mountains, capturing in words and film the awe-inspiring beauty of the hills. Several of his books have been translated into French, German, Dutch, Italian and other foreign languages. Numerous periodicals, journals, magazines, films, books and national awards are a testimony to his roots.

In the spring of 1808, Captain Hyder Jung Hearsey and Captain Felix Raper became the first visitors to get a view of the Garhwal Himalayas from the bend near Lal Tibba in Landour.
For centuries the Himalayan foothills have been summer retreats, where, the chaans or temporary thatch-shelters of the local hill folk were the only signs of human habitation. It was left to the British to come up, move in and claim all the credit for discovering hill stations all over India.
In the early nineteenth century, Capt Young, an intrepid official of the East India Company arrived in Landour, was charmed by the gentle climateÃƒÂ¢Ã¢â€šÂ¬Ã¢â‚¬Âan indispensable relief from the heat of the plains down belowÃƒÂ¢Ã¢â€šÂ¬Ã¢â‚¬Âand built a shooting lodge in Mullingar.
ÃƒÂ¢Ã¢â€šÂ¬Ã‹Å“Like meat, we keep better here,ÃƒÂ¢Ã¢â€šÂ¬Ã¢â€žÂ¢ gushed Lady Emily EdenÃƒÂ¢Ã¢â€šÂ¬Ã‚Â¦ ÃƒÂ¢Ã¢â€šÂ¬Ã‹Å“The climate! No wonder I could not live down below. We were never allowed a scrap of air to breatheÃƒÂ¢Ã¢â€šÂ¬Ã‚Â¦The air is a cool sort of stuff, refreshing, sweet and apparently pleasing to the lungsÃƒÂ¢Ã¢â€šÂ¬Ã‚Â¦I see this as the best part of India.ÃƒÂ¢Ã¢â€šÂ¬Ã¢â€žÂ¢
The Raj summers in Mussoorie, chintz tablecloths and lace doilies, amateur dramatics of the Mussoorie Theatre Group at the Happy Valley Club: all these are woven together with long years of research. Ganesh SailiÃƒÂ¢Ã¢â€šÂ¬Ã¢â€žÂ¢s Mussoorie Medley: Tales of Yesteryear takes the reader down nostalgia lane to evoke the mystery and magic of the times gone by.

Be the first to review “Mussoorie Medley: Tales of Yesteryear” Cancel reply