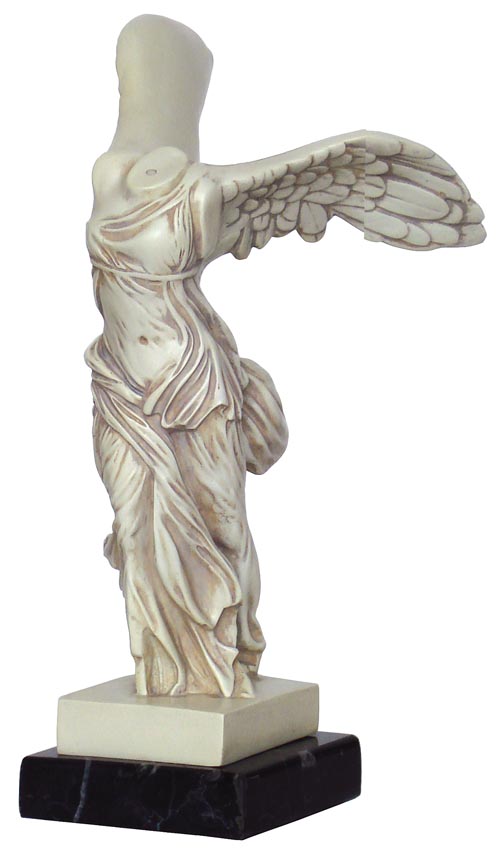 The Nike of Samothrace was found on the island of Samothrace, in the Aegean Sea, Greece, in 1863 by a French expedition. Nike is the goddess who personified triumph and victory in Greek Mythology. She is the daughter of the giant Pallas (warrior) and Styx. Nike and her siblings were all attendants of Zeus. According to myth, Styx brought them to Zeus when the god was assembling allies for the coming Titan War. Nike assumed the role of the god’s personal charioteer. At first she was considered an aspect of Pallas Athena, the dispenser of victory, but she is gradually separated from her. In her role as a war goddess, Athena, Zeus and Ares can be seen carrying small figures of Nike indicating that she is an attribute to them. Nike with Athena is always wingless while Nike as a separate goddess is always winged. Nike appears carrying a palm branch, wreath, or a caduceus of Hermes in works of art. She is also seen erecting a trophy or recording a victory on a shield. Frequently she is seen hovering with outspread wings over the victor in a competition. Nike is often shown flying down with a torch and a wreath to bestow victory on an Athlete. Greek custom shows Nike draped and the athlete nude. Her Roman counterpart is Victoria. The Winged Victory of Samothrace is one of the masterpieces of Hellenistic sculpture.

Be the first to review “Nike” Cancel reply