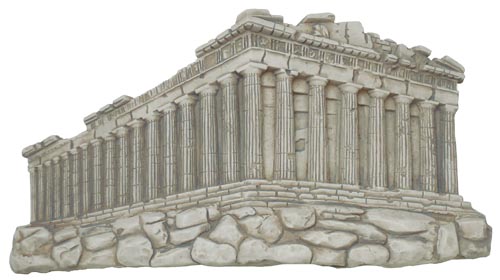 The Parthenon is the great temple of Athena Parthenos, the chief goddess and protectress of Athens. The Pathenon is the highest achievement of ancient Greek classical art and the most significant and representative monument of the Athenian democracy at the height of its glory. The Parthenon was built in the 5th century BC on the Acropolis of Athens and replaced an older temple of Athena, called the Pre-Parthenon, that was destroyed in the Persian invasion of 480 BC. Like most Greek temples, the Parthenon was also used as a treasury. In the 6th century AD, the Parthenon was converted into a Christian church. After the Ottoman conquest, it was converted into a mosque in the early 1460s. On September 28, 1687, an Ottoman ammunition dump inside the building was ignited by Venetian bombardment. The resulting explosion severely damaged the Parthenon and its sculptures. In 1806, Thomas Bruce, 7th Earl of Elgin removed some of the surviving sculptures, with Ottoman permission. These sculptures, now known as the Elgin or Parthenon Marbles, were sold in 1816 to the British Museum in London, where they are now displayed.

Be the first to review “Parthenon Relief” Cancel reply