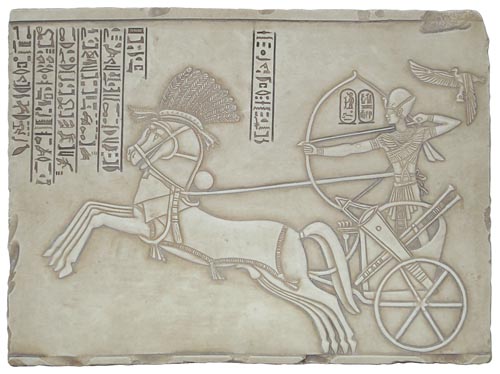 Ramses II at the battle of Kadesh

The most celebrated of all Pharaohs, Ramses II, is well known for the length of his reign, the numerous temples he built and his military campaigns, such as the battle of Kadesh where Ramses II, facing the army of Muwattali, King of the Hittites found himself surrounded by 2500 Hittite Charioteers with only his personal bodyguard to help him. As the enemy closed in around him, Pharaoh leaped into his chariot, tied the reins around his waist to leave his hands free, sent forth a great cry for help to Amun and charged six times against the Hittites, finally breaking through and winning the battle. Ramses II was the son of Seti I and was crowned Pharaoh in 1290 B.C. when he was 18 years old. Ramses II had many wives but the first and favorite chief Queen was Nefertari. Ramses died at the age of 85 after ruling Egypt for 67 years.