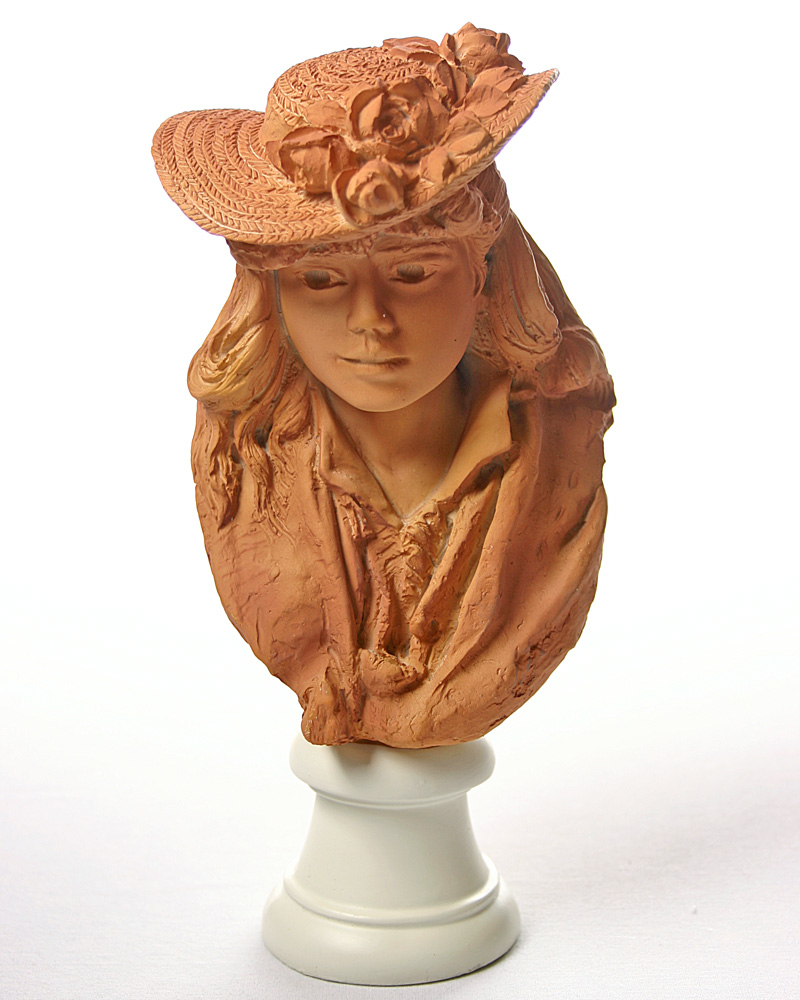 In 1864, Auguste Rodin met a seamstress named Rose Beuret. She became his lifetime companion and modeled for many of his works. In this portrait, Rodin celebrates their association with this charming interpretation of Rose Beuret with a straw hat. The reproduction is colored after the original terracotta clay Rodin used for his original. It is a perfect height for a desktop or bookshelf. The intricacies of the carving and details in her hat are beautiful! ABOUT RODIN AND ROSE’S RELATIONSHIP: Rose Beuret went as a country girl to Paris to start work as a seamstress in one of the many workshops. It was there where she met Rodin and, in his own words, “clasped to him like an animal”. Two years later she gave birth to a son, who was never acknowledged by the father. She remained his partner for over 50 years and only married him in 1917, a few days before she died. Rose was a lifelong stable factor in the background for Rodin. She was not part of his social life though and had to put up with a lot. She regularly modeled for Rodin as in this subtle portrait which becomes even more fascinating when you keep in mind the later role she played in Rodin’s life. AUGUSTE RODIN (1840-1917)In between Romanticism and Impressionism this self-willed Frenchman created some of the most famous pieces known in the art of sculpting. He was very talented at conveying feeling in his compositions by emphasizing gesture. Also, his rough surface texture with deep hollows added strong shadows and naturalism to the human form. Rodin’s goal, as he put it, was “to render inner feelings through muscular movement.” He achieved this aim by joining his profound knowledge of anatomy and movement with special attention to the body’s surfaces, saying, “The sculptor must learn to reproduce the surface, which means all that vibrates on the surface, soul, love, passion, life…Sculpture is thus the art of hollows and mounds, not of smoothness, or even polished planes.”