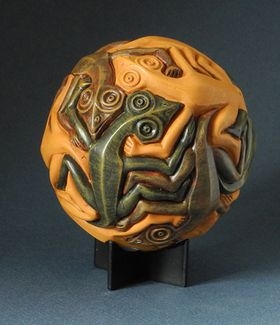 Sphere with Reptiles Tessellation by Escher

Escher sphere is a desktop ornament and paperweight. It shows reptiles interlocked on all sides. Comes with stand as pictured. Part of the Parastone Collection of museum replicas.

M.C. Escher (1898-1972): Escher was a 20th century Dutch graphic artist recognized for his unique interpretation of repeating patterns (tessellations), impossible architecture, and skills in woodcutting and lithography. Although lacking formal training in math or science, he was greatly appreciated by mathematicians, scientists, and crystallographers for his intuitive capacity for transforming geometric shape into a workable and adapting scheme. He became fascinated by the regular Division of the Plane when he visited Alhambra, a 14th-century Moorish castle in Granada, Spain in 1922. Later he would extend his passion from paper to carved beech wood spheres.