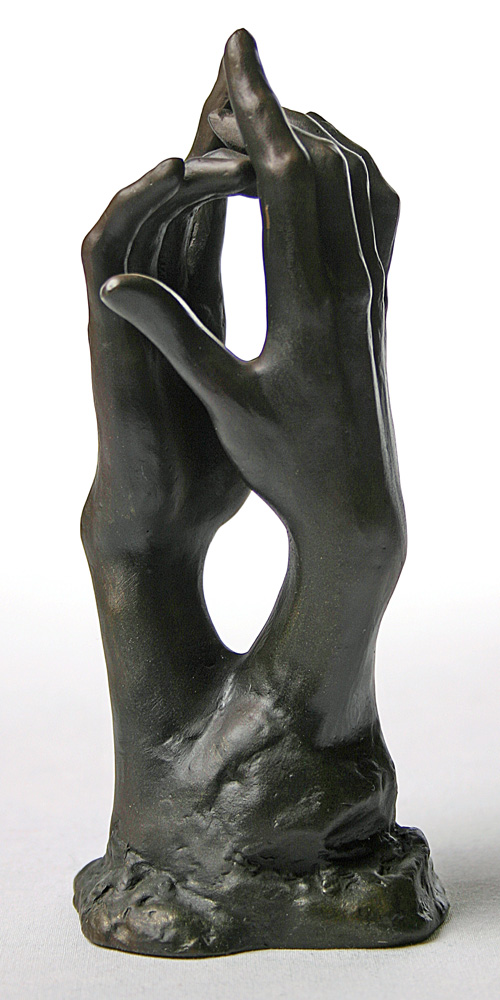 Study for The Secret Clasping Hands by Rodin

Study for ‘The Secret’ Sculpture by Auguste Rodin (1906-1909)
Rodin was fascinated by the expressiveness and symbolism of hands. In his famous sculpture ‘The Cathedral’ for example, the hands mirror majestic Gothic architecture. These two graceful hands are a study for ‘The Secret’, a marble sculpture in which two right hands clutch an abstract, rectangular ‘secret’.

Rodin (1840-1917)
For a long time the life of the sculptor Rodin was marked by the mixed reactions his work provoked with the audience. The lack of understanding for Rodin’s work was partly due to the original character of his art. He felt little for the strict formats of Romanticism and neither did he want to identify himself with the neutrality of the Impressionists. Rodin’s work is characterized by a passion for the human body and he considered himself incapable of any creativity if he did not have a living model in of him. ‘In everything I follow nature and I never pretend I am able to control her. My only ambition is to be subservient and faithful to her’. He said. Questions about his often controversial, erotic works were answered with the remark: ‘Art is actually nothing more than a manifestation of lust, which only arises from the potency to love.’ Rodin’s life upheld this belief with a vast succession of lovers having passed his artistic eye. Many affairs were brief, but one of them turned out to be of enormous value to his later work; Camille Claudel. This self-willed, fierce woman, who was a very talented sculptor herself, inspired him to create his most famous and admired sculptures. The affair continued for a long time, although Camille had to put up with Rodin’s numerous escapades and his loyal companion Rose Beuret. Eventually, the affair ended and Camille suffered the dramatic consequences of this split. She became isolated and confused and in the end she was forced by her family to have herself admitted to psychiatric hospital.