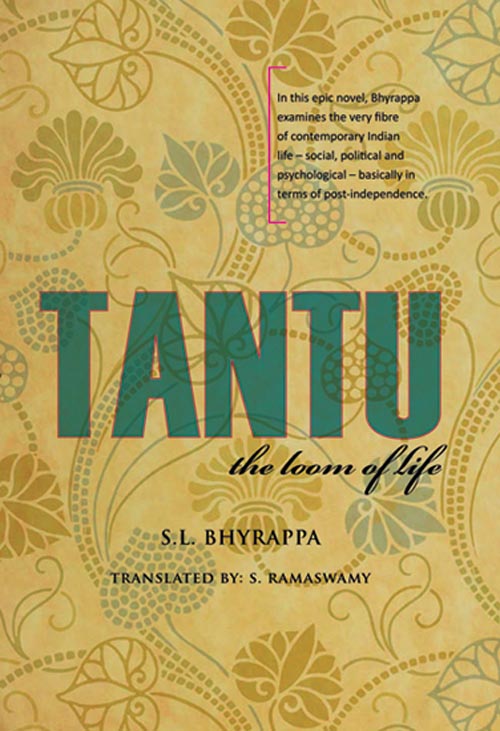 Tantu: The Loom of Life

S. Ramaswamy, a three-time Fullbright Scholar at the Universities of California, Texas and Yale, a two-time British Council Scholar at Oxford and London, a Shastri Indo-Canadian Fellow at McGill University, Montreal, is a Fellow of Silliman College, Yale University. He is also winner of the Phi Beta Kappa Award of Southern California and the Karnataka State Sahitya Akademi Award. Ramaswamy studied Sanskrit traditionally in a pathshala, and went on to become editor of Tattvaloka ÃƒÂ¢Ã¢â€šÂ¬Ã¢â‚¬Å“ A Journal of Vedanta. He has translated many books from Sanskrit and Kannada into English, among them S.L. BhyrappaÃƒÂ¢Ã¢â€šÂ¬Ã¢â€žÂ¢s Saartha. Fifteen of his books (eight in English, seven in Kannada) have been published.

ABOUT THE BOOK:
In this epic novel, Bhyrappa examines the social, political, moral and psychological fibre of contemporary Indian life, spanning the decades between post-Independence and the declaration of the Emergency under Indira Gandhi. The range of characters is astonishingly comprehensive ÃƒÂ¢Ã¢â€šÂ¬Ã¢â‚¬Å“ the true Gandhian idealist who, despite all odds, holds on to his values; an honest, uncompromising journalist who remains steadfast to his professional ethics; the ÃƒÂ¢Ã¢â€šÂ¬Ã…â€œliberatedÃƒÂ¢Ã¢â€šÂ¬Ã‚Â career woman who gains favour in the business world due to her promiscuity; and the academic-politician with a carefully cultivated charm used to seduce impressionable young women.

Tantu is panoramic in scope, moving from Bangalore to Mysore, from Banaras to Delhi. Police brutality, goondaism at the village level, the superficial five-star hotel culture and the smuggling of art objects out of the country are all subjects the novel relentlessly examines. Corruption and nepotism in high and low places is portrayed with absolute candour, as is the steady erosion of traditional Indian values. Tantu is a fascinating survey of modern India, examined from many different angles.

Be the first to review “Tantu: The Loom of Life” Cancel reply