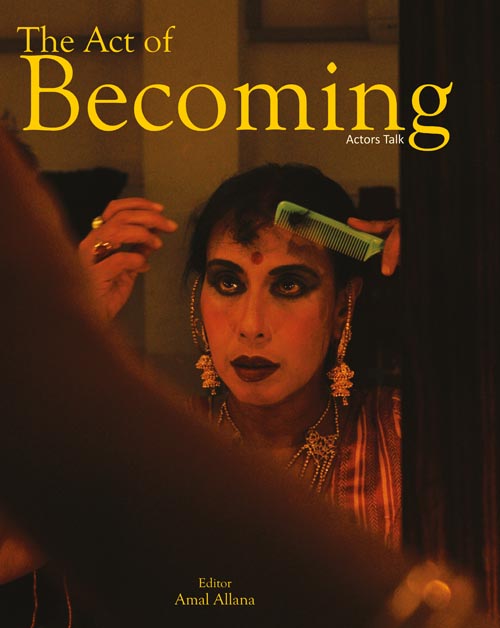 The Act of Becoming: Actor Talk

:
Amal Allana was born in 1947 and raised in a family of theatre stalwarts. She majored in Direction from the National School of Drama (NSD) in Delhi in 1968, going on to esteemed theatre companies for training in the former GDR, such as the Berliner Ensemble and the National Theatre Weimar among others. Later, she had the unique opportunity to study theatre forms such as Noh and Kabuki in Japan. A renowned theatre director of over 60 productions, AllanaÃƒÂ¢Ã¢â€šÂ¬Ã¢â€žÂ¢s plays are meditative reflections on our times, a vision that transcend narrow definitions of culture and nationality, thereby exploring the intercultural nature of human experience. For the last eight years, as Chairperson of NSD, she has focused her creative and administrative energies on spearheading the nationÃƒÂ¢Ã¢â€šÂ¬Ã¢â€žÂ¢s premier theatre institute. Amal Allana has earlier contributed to the field through heading the Department of Indian Theatre, Chandigarh, establishing theatre companies in Mumbai and Delhi (The Workshop, Studio 1 and Theatre and Television Associates [TTA]), and setting up a school to impart theatre training (The Dramatic Art and Design Academy [DADA]) along with her husband, Nissar Allana. She writes on theatre, also disseminating its many facets to the public at large through talks, seminars, exhibitions and workshops. Allana is the recipient of several national and international awards, including the Sangeet Natak Academy Award for Direction in 1998. She lives and works in Delhi

ABOUT THE BOOK
:
In this unique publication on theatre performance, twenty-two critically acclaimed actors talk to us about their journeysÃƒÂ¢Ã¢â€šÂ¬Ã¢â‚¬Å“their lives and aspirations, their in-depth training, and lasting stage careers. The range of these stalwarts spanning the 1850s-1990s includes Binodini Dasi, Bal Gandharva, Fida Husain, Zohra Segal, Sombhu Mitra, Shreeram Lagoo, Utpal Dutt, Manohar Singh, Uttara Baokar, Naseerudin Shah, Heisnam Sabitri and Maya Krishna Rao, among many others. Researched over a decade, The Act of Becoming is set against IndiaÃƒÂ¢Ã¢â€šÂ¬Ã¢â€žÂ¢s struggle for Independence. Side-byside, this book also explores the complexities of women actors trying to gain acceptance in public life as professionals. In light of the changing political clime, these personal narratives altogether contribute to a riveting account about the encounter with the west that was absorbed rapidly by Indian practitioners. Visiting companies from England, the United States of America, and Europe provide a template for modern forms of theatre practice. This ÃƒÂ¢Ã¢â€šÂ¬Ã‹Å“interactionÃƒÂ¢Ã¢â€šÂ¬Ã¢â€žÂ¢ lays the foundation for the honing of a national culture and identity that comes into its own with the intensification of the freedom struggle. Through such vicissitudes, Indian theatre practitioners are compelled to bring social and political issues into the public arena, making theatre a platform of resistance, culminating in the 1940s with the pioneering work of Indian PeopleÃƒÂ¢Ã¢â€šÂ¬Ã¢â€žÂ¢s Theatre Association (IPTA), as well as individuals like Prithviraj Kapoor and Utpal Dutt. The founding of the National School of Drama in the late 1950s with its dedicated program to meet the challenges of a fast developing transcultural, international practice is also discussed at length.The Act of Becoming is a fascinating account of the evolution of modern Indian theatre, putting actors at the forefront of this powerful medium.

Be the first to review “The Act of Becoming: Actor Talk” Cancel reply