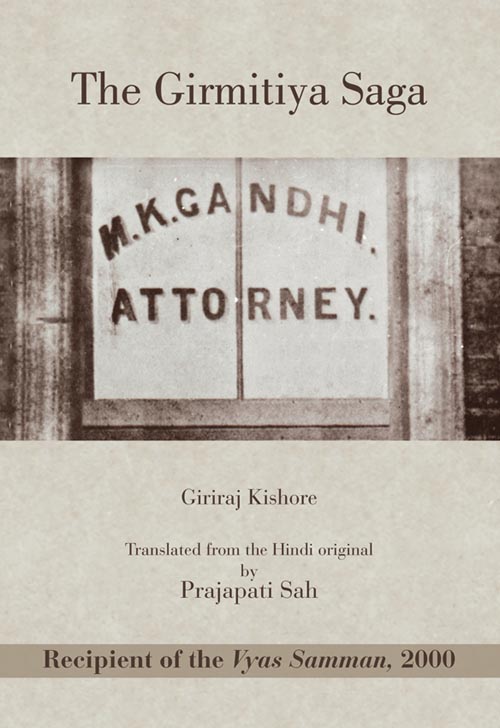 With a literary career spanning over half a century, Giriraj Kishore has mastered the art of storytelling. Among his better-known novels are Dhaii Ghar, Jugalbandi, Chiriyaghar, Log, Parishist, Yatha Prastavit, Yatraein, and Do. He also has several short-story collections and plays to his credit. Currently he edits the Hindi literary magazine Akaar and regularly contributes articles and columns to Hindi newspapers and magazines. Giriraj Kishore was Registrar of the prestigious Indian Institute of Technology Kanpur, where he founded the Centre for Creative Writing in 1983. He has been Convener of the Hindi Committee of Sahitya Akademi, Delhi, a Fellow of the Institute of Advanced Studies, Shimla, and Emeritus Fellow of the Ministry of Culture. Giriraj Kishore has been honoured with the Padma Shri, one of IndiaÃƒÂ¢Ã¢â€šÂ¬Ã¢â€žÂ¢s highest civilian honours. He received the Sahitya Bhushan Award from the Government of Uttar Pradesh and the Sahitya Akademi Award from the Government of India in 1992.
Prajapati Sah retired as Professor of English and Linguistics from the Indian Institute of Technology, Kanpur, in 2001. Earlier, he served as Lecturer of English Literature at the University of Allahabad. Educated at the University of Allahabad and University College London, he did his Ph.D. at the University of York in Linguistic Theory. He has always been deeply interested in poetry and translation. In the ÃƒÂ¢Ã¢â€šÂ¬Ã¢â€žÂ¢60s, he contributed to Nayi Kavita and also published literary
criticism. His English translations include two novels, Dhaii Ghar by Giriraj Kishore and Poorvapar by Ramesh Chandra Shah, and several stories by other noted Hindi authors. His Hindi rendering of Jayant MahapatraÃƒÂ¢Ã¢â€šÂ¬Ã¢â€žÂ¢s epic poem Relationship has been published by Sahitya Akademi. Currently he is translating AgyeyaÃƒÂ¢Ã¢â€šÂ¬Ã¢â€žÂ¢s poetry into English.

In May, 1893, a 24-year-old-attorney arrived at Durban on a yearÃƒÂ¢Ã¢â€šÂ¬Ã¢â€žÂ¢s girmit (contract) to fight a lawsuit for Dada Abdullah and Co. Thrown out of the train to Pretoria, he was to taste the racial discrimination that plagued the land at that time. Subsequent experiences in South Africa sensitized him to the plight of the girmitiyas (bonded labours). Suspended between despair and a hope for an implausible escape to their promised land, the girmitiyas found in this young attorney a voice that would guide them to a new dawn. In The Girmitiya Saga, Giriraj Kishore retraces the socio-political background of the 19th and 20th-century South Africa, highlighting the importance of the young attorneyÃƒÂ¢Ã¢â€šÂ¬Ã¢â€žÂ¢s actions in South Africa and their monumental significance for humanity as a whole. After having carefully researched the subject in South Africa, England, Mauritius and India, Giriraj Kishore has imaginatively cast the facts in the mould of an arresting novelÃƒÂ¢Ã¢â€šÂ¬Ã¢â‚¬ÂPehla Girmitiya. First published in Hindi in 1999, the novel was very well received in the world of Hindi literature. The following year, the author was honoured with the Vyas Samman by the K.K. Birla Foundation, and the Mahatma Gandhi Samman by the Uttar Pradesh Hindi Sansthan for this book.
A flesh-and-blood human being, Mohandas Karamchand is an average man who finds himself, along with many others, in a particular historical and sociological configuration that sets him off on a life-altering pathÃƒÂ¢Ã¢â€šÂ¬Ã¢â‚¬Âtowards becoming the MahatmaÃƒÂ¢Ã¢â€šÂ¬Ã‚Â¦

Be the first to review “The Girmitiya Saga” Cancel reply