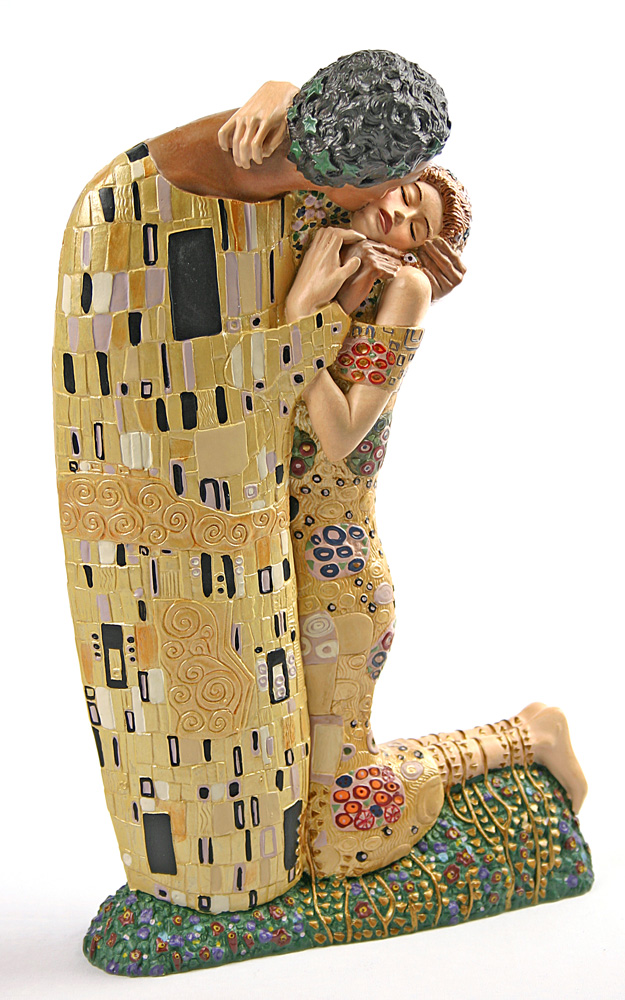 The powerful bond between man and woman (c. 1907) is eloquently illustrated by the renowned 20th-century artist, Gustav Klimt. His paintings are large allegorical canvases which combine linear construction and rich colors often illustrating a world of beautiful women and nudes against a bejeweled background. Now in the Osterreichische Galerie, Wien. The ornamental facade seems to hide a pure almost esoteric feeling of felicity, portrayed in a classical manner, nestling in a bed of flowers. In accordance with the Jugendstil tradition, these lovers appear to be detached from the world. An impression that is reinforced by the application of shades of gold and gold leaf.

Parastone, a renown European collectible figurine manufacturer, has masterfully brought to life this legendary immortal painting of the Kiss by Art Nouveau master artist Gustav Klimt, as an intricate 3D statue adaptation in the greatest detail.

Gustav Klimt (1862-1918)was a prominent member of an innovating group of artists called ‘Sezession’ and is considered to be one of the main pioneers of modern art. Apart from this, his ornamental Jugendstil style evokes an irresistible feeling which is inspired by the ‘fin-de-siecle’ of 19th century Vienna: elitist, liberal-middle class, decadent, pleasantly-decorative. His work is extremely recognizable due to his monumental style combined with Byzantine-like ornamental art and classical symbolism, created against the background of romanticism which was so characteristic of his time. In Sezession’s own words: “Art guides us to an ideal realm, the only place where we will be able to find pure joy, pure happiness and pure love. A choir of angels from paradise. Joy given by divine sparkles. That kiss from the entire world!”

Be the first to review “The Kiss Man and Woman Hugging Statue by Gustav Klimt, Grande” Cancel reply