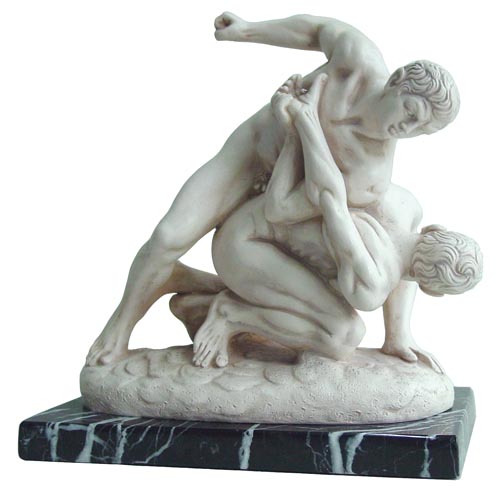 The Wrestlers clearly demonstrates how far the technique of Greek classic sculpture had advanced in its depiction of the human body. Five hundred years before, sculptors rigidly displayed the human figure with hips and shoulders aligned, body planes accentuated, and one foot advanced. The creator of this dynamic work chose a moment in an athletic contest when intense muscle strain is about to begin. The intertwining legs and convolution of the bodies draw the eye around the figures in anticipation of movement that seems at any moment to commence. In ancient Greece, wrestling occupied a prominent place in legend and literature; wrestling competition, brutal in many aspects, was the supreme contest of the Olympic Games. The ancient Romans borrowed heavily from Greek wrestling, but eliminated much of its brutality.

Be the first to review “The wrestlers” Cancel reply