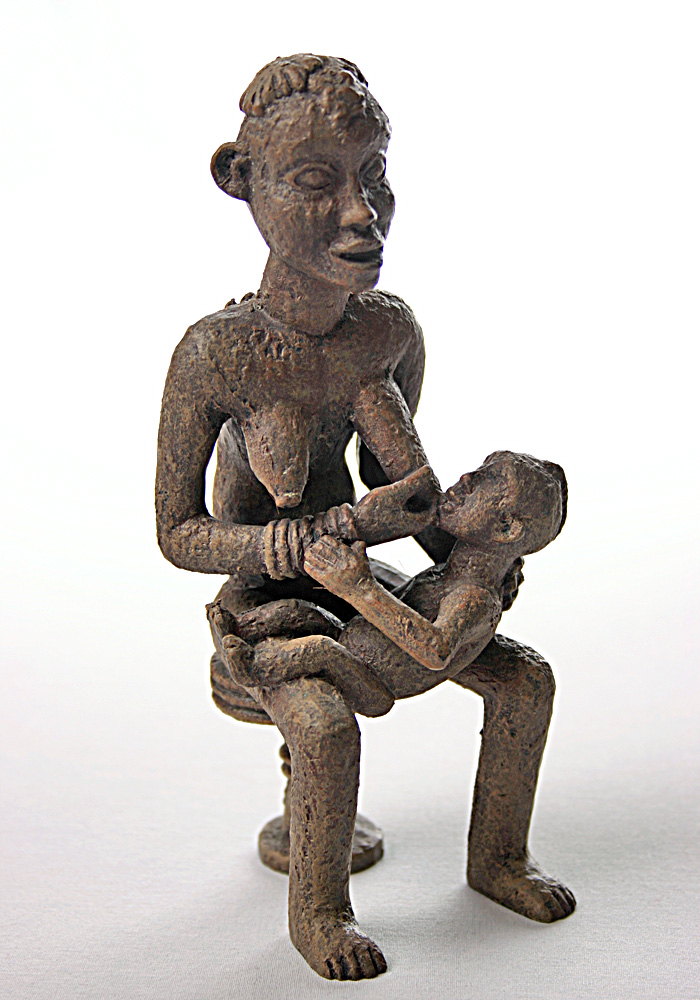 African Bangwa Anyi, Mother of Twins (early 19th century)
This touching figurine illustrates an African mother nursing one of her twin babies. As a mother of twins, she is known as an Anyi to the tribe and wears special attributes such as her hairstyle, her necklace made of the teeth of a panther (which she has turned on her back) and her bracelets. Her sitting pose and the decorated stool indicate she belongs to an important family. When a woman gives birth to twins she is assigned an almost godlike status. As an Anyi, she receives valuable necklaces with beads and two ritual mugs. Special wooden figurines are cut in her honor and her husband (the Tanyi).

The Anyi dances at parties and funerals, and leads rituals to beg fertility from the earth. By waving a branch of the tree of peace (the Dracaena or the Dragon’s blood tree) she can reconcile fighting parties. Shortly before puberty the twin children are rubbed with a red ointment (on the basis of sandal wood) and are parted from the rest of the community for a few weeks. They are given a special chicken dish, while other Anyi dance around their hut. In the end, the father sacrifices a rooster and a goat, by which the children are withdrawn from the world of ghosts.

The Bangwa tribe live in the grass African Savannah area in the northwest of Cameroon. They are a small African tribe which is part of the larger ethnic group of the Bamileke. The skillful Bangwa woodcutters are famous for their horrifying masks for the “Brotherhood of the Night”.