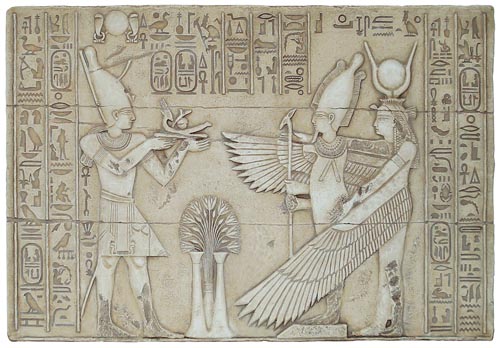 An Offering to Isis & Osiris

This relief shows Isis protecting her husband Osiris with her wings. A pharaoh is also shown offering a libation to them. Isis together with her husband Osiris and their son Horus formed the main triad of the Egyptian religion. The name Isis means “Seat” or “Throne”. She was regarded as the symbolical mother of the King. In myth she sought her dead husband and brother, Osiris, conceived her son Horus by him, buried and mourned him together with her sister Nephtys. Isis was regarded as the “Eye of Ra and was worshipped as the “Great of Magic” who had protected her son Horus from snakes, predators and other dangers; thus she would protect mortal children also. In the New Kingdom Isis was closely connected with Hathor whose physical attributes, the cow’s horns and sun-disk she adopted. The Ancient Egyptians regarded the Goddess as the “Eye of Ra”. Osiris, the Resurrection God, is the central figure in the afterlife myth and in Egyptian mythology as a whole. His name means “The Seat of the Eye”.