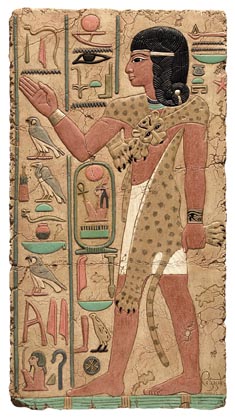 This relief depicts the young prince Seti I with his arm raised in the summoning position as part of a religious ritual. Here, he is serving in a priestly function as a innmutef priest symbolizing the divine child Horus with hair in a sidelock to represent youth and dressed with a leopard skin. As the eldest son of the royal family who cared for the deceased king he summons the revered spirit of the King, now identified with Osiris, and pronounces a formula before the image of his father Ramses I. A capable ruler, excellent field commander and energetic builder, Seti I embarked on a series of military campaigns in an effort to secure the boundaries of Egypt. Echoing the achievements of kings of the XVIII dynasty before Akhenaten, he inaugurated a major program to build and refurbish religious monuments at Thebes and Abydos. He took the additional title of “Repeater of births” to indicate that he regarded himself as the inaugurator of a new era. Seti I was seceded by his son, the famous Ramses II the Great.

Be the first to review “Egyptian priest relief” Cancel reply