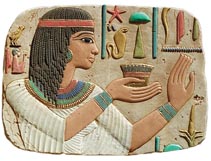 Her name was Nes-Amun. She was one of the more than fifty daughters of Ramses II. Princesses were called Royal Daughters. They often had their own palaces or at least their own compound within the palace with an extensive staff of attendants. Sometimes the older daughter would marry their father after the death of their mother thus becoming the new Chief Queen. Often when a brother became king, he would marry the older sister probably following the tradition of the gods Osiris and Isis, who were brother and sister as well as husband and wife. A princess was often very involved in religious duties usually as priestesses of the goddess Hathor. In this wall fragment, Nes-Amun wears an elaborate wig and a white linen dress while presenting an offering to a deity.

Be the first to review “Egyptian princess relief” Cancel reply