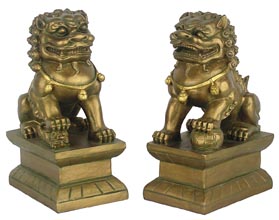 Guardian Lions are sacred to Buddhism, where they are seen as guardians of the Teaching (Dharma) and their “Lion’s Roar symbolizes the voice of the Teachings of Buddha resounding in all directions. Guardian Lions are the protectors of sacred buildings and are seen as emblems of valor and energy. Sculptured lions are frequently placed at the gates of the temples, porticos of the houses and sometimes guarding the precincts of tombs. They are also used on an altar placed toward the front, one on each side. They are usually used in male-female pairs where the male lion is represented playing with a ball which may represent the sun, the egg symbol of the dual aspects of nature, or merely a precious stone. The female lion is generally accompanied by its young.