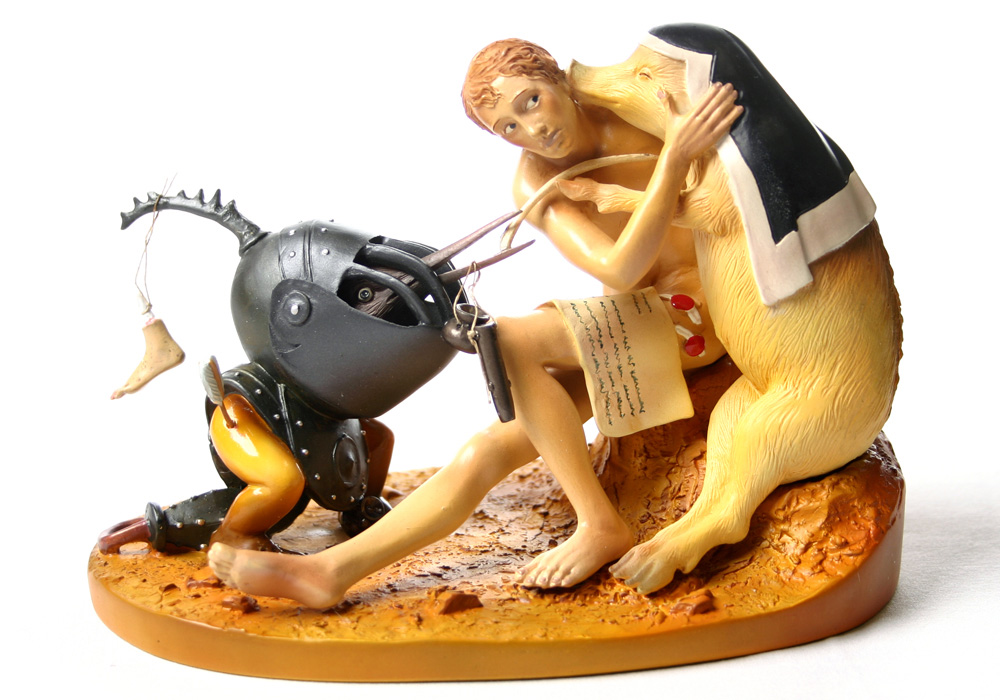 Helmeted Bird Monster, Tortured Soul, Sister Swine by Bosch
This helmeted bird monster is carrying a pencil box and an ink pot in its beak, in which the nun, decaying into a pig, is dipping her pen. A severed foot is swinging from the bird’s helmet referring to the horrible corporal punishments which could be expected in hell. The pig, indeed an indictment against the decay of clergy life, is tempting the man who is sitting beside him and it appears that he is drawing up a contract. Is the man possibly selling his soul? From an artistic point of view, the world famous brilliant forerunner of surrealism was, in his day, unique and radically different.

Hieronymus (Jeroen for short) Bosch was born (ca. 1450-1516) during the transition from the Middle Ages to the Renaissance in s-Hertogenbosch, in the Duchy of Brabant. Bosch places visionary images in a hostile world full of mysticism, with the conviction that the human being, due to its own stupidity and sinfulness has become prey to the devil himself. He holds a mirror to the world with his cerebral irony and magical symbolism, sparing no one. He aims his mocking arrows equally well at the hypocrisy of the clergy as the extravagance of the nobility and the immorality of the people. Hieronymus Boschs style arises from the tradition of the book illuminations (manuscript illustrations from the Middle Ages). The caricatured representation of evil tones down its terrifying implications, but also serves as a defiant warning with a theological basis. Parastone, a renown European collectible figurine manufacturer, has masterfully brought to life this legendary iconic painting of the Helmeted Bird Monster by late Medieval / early Renaissance artist Hieronymus Bosch, as an intricate 3D statue adaptation in the greatest detail.