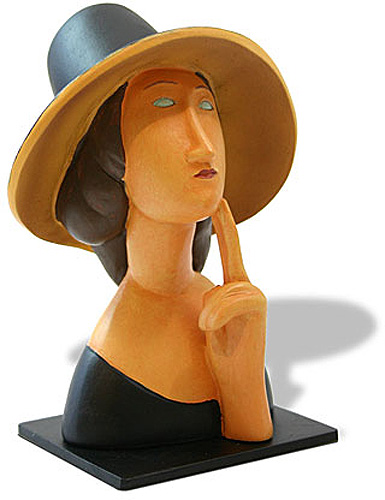 Two years before his death Amedeo painted a portrait of his 21-year-old Jeanne Hebuterne with a big straw hat. He had lived together with this fair-skinned, auburn-haired young artist since 1916. Jeanne’s portrait with a big straw hat is considered the most beautiful of the sixteen portraits Amedeo painted of her. With his typical use of colors, inspired by Byzantine art, he paints a modest, friendly Jeanne in geometric forms. The portrait is painted in the year that Jeanne becomes pregnant with their daughter Giovanna. Two years later she becomes pregnant again but ends her own life the day after Amedeo dies. Amedeo Modigliani’s work is recognized immediately by many people because of the typical elongated shapes. His paintings show his passion for sculpting, a craft which he had to give up in 1915 due to ill health. Statue replica is part of the Parastone Museum Collection.