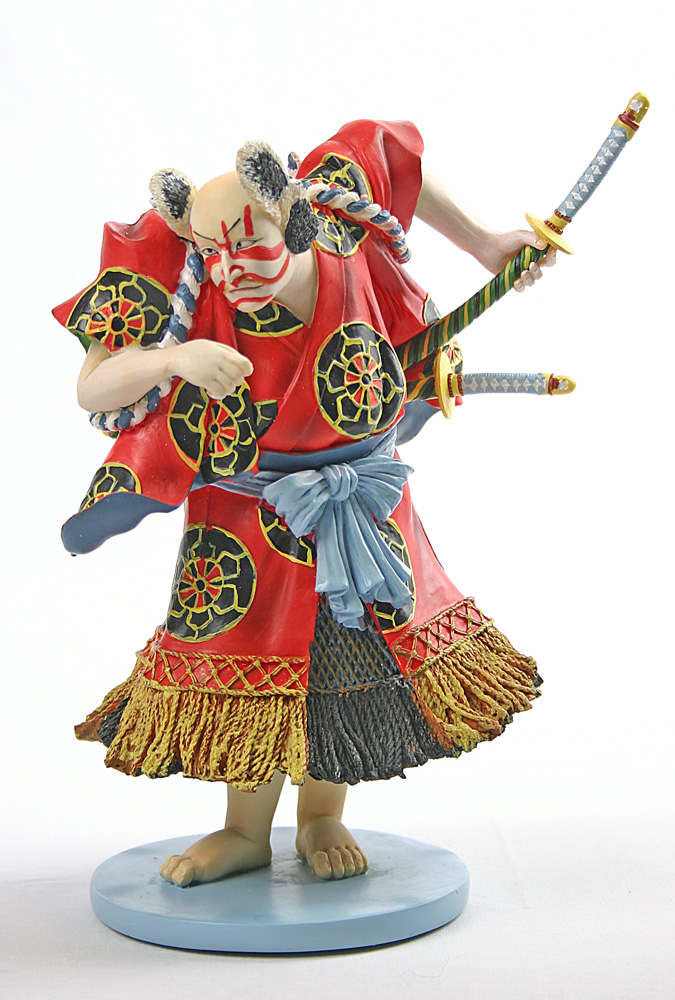 Kabuki with Sword by Kunisada Utagawa

Kunsinada Utagawa (1786-1865) During his lifetime Kunisada was considered one of the greatest ukyio-e artists. As a son of a rich merchant from Edo, he learned his trade in the prominent Utagawa Toyokuni studios. After publication of his first portraits of Kabuki actors in 1808 his fame rose to great heights. Commercially he became the most successful wood block print artist ever.

The Kabuki Theatre From the beginning of the 17th century, Kabuki is a prominent feature in the nightlife of the big cities. Initially the rebellious plays have a strong erotic atmosphere. However, in 1629 the leaders banished the women and later, from 1652 onwards, the young men were also banished from the stage. Because of this more room was created for the story itself. The performance could last a full day, beginning with a heroic history play, followed by a dramatic, sometimes ironic play about daily life. Dramas about an impossible love, ending with a double suicide were very popular. There was a lot of contact between players and audience. A lot of shouting and stamping went on and the actors were spurred on loudly. Bando Kamezo The Kabuki actors were national heroes, although they belonged to the hinin, the lowest class. They were considered as idols by the audience. Consequently, the portraits of the actors (which were also on sale at the theatre) sold out fast.

Part of the Parastone Collection of Museum Replicas, Samurai and Geisha Series.