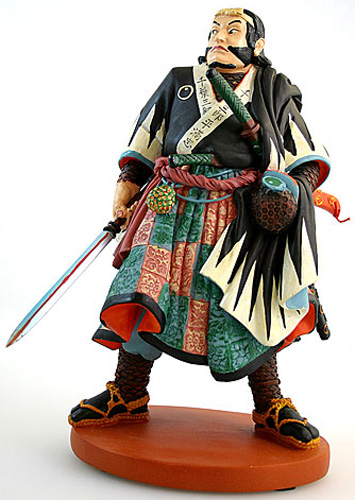 Samurai Standing with Sword in Hand by Utagawa Kuniyoshi

Utagawa Kuniyoshi (1797-1861) After a difficult start as an independent artist he got his break with his series “The 108 Heroes of the Suikoden”, based on a popular Chinese tale from the 14th Century. He developed into the best known portraitist of heroes and warriors. The series Seishu Gishi Den, portraits of 47 Ronin, Samurai without a master, is based on a true heroic story.

The Faithful Samurai (1847-1848) The series Seishu Gishi Den, portraits of 47 Ronin, Samurai without a master, is based on a true heroic story: in 1701 Lord Asano van Ako was provoked by Kira, the arrogant chamberlain of the shogun. Asano lost self control and wounded Kira and was forced to kill himself according to ceremony. 47 faithful Samurai were intent on revenge for a year. Finally Kira’s house was attacked and Kira was beheaded. All 47 Samurai were forced to commit seppuku. They died like heroes of the people and the blood-curdling story was played many times in the Kabuki theater. Chiba Sabrohei Mitsutada Chiba Mitsutada was a rough diamond type of man. Although he had become a Ronin earlier, he still decided to revenge the death of his former lord. Under a false name he trained warriors from home, especially in archery.

Part of the Parastone Collection of Museum Replicas, Samurai and Geisha Series