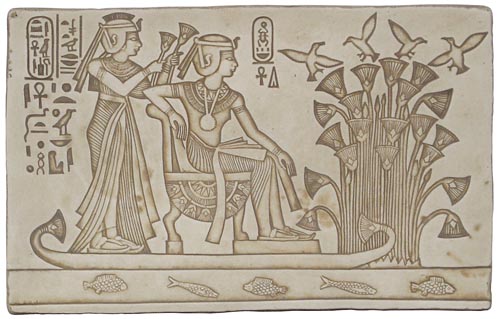 This scene is a detail from the shrine of Tutankhamun and shows the King and his wife Ankhesenamun in a boat made of papyrus stems navigating through the papyrus marshes. Despite the richness of his burial, Tutankhamun remains an enigmatic figure. He died as young as 16 or 17 years of age. He was probably a son of King Akhenaton by one of his secondary wives. His wife Ankhesenamun was daughter of Akhenaton and Nefertiti. Tutankhamun came to the throne as a young child and ruled for about nine years under the regency of Vizier Ay and the strong influence of the army commander Horemheb. The main events of his reign were to move the capital of Egypt back from El-Amarna to Memphis and to begin the transiton from the monotheistic cult of Aton created by Akhenaton back to the polytheistic religion of Egypt with Amun-Ra again as the main God.