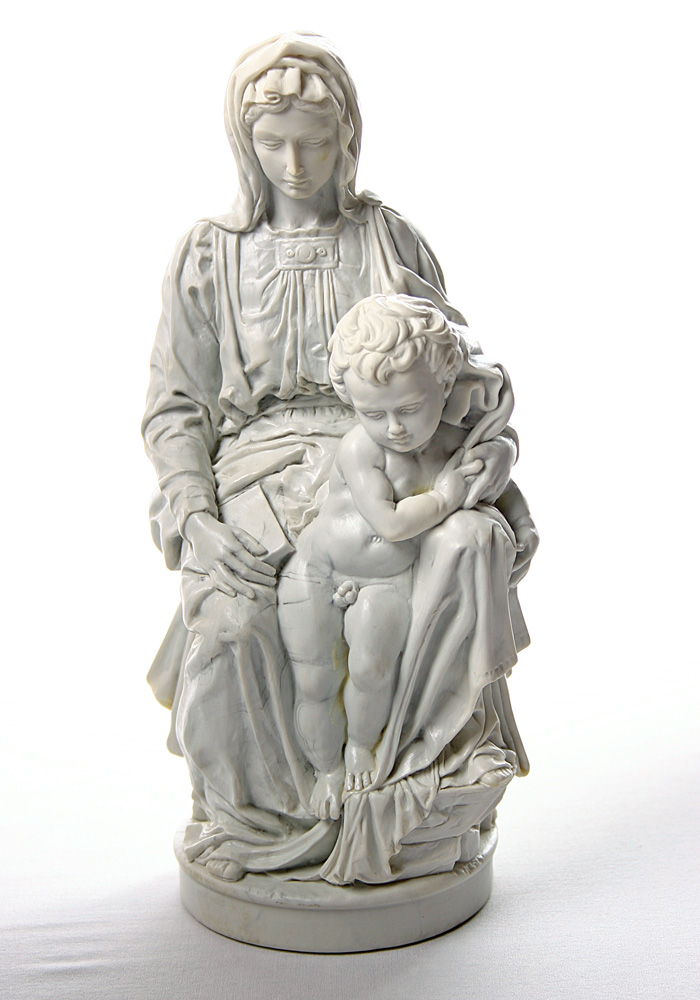 Madonna of Bruges with Baby Jesus by Michelangelo

Madonna of Bruges by Michelangelo (1501-1504):
The Madonna of Bruges is the only sculpture by Michelangelo to leave Italy during his lifetime. It was purchased in 1506 by a rich textiles merchant from Bruges and later bequeathed to that city. It had originally been intended for the Cathedral of Siena. However due to conflict with the principal, Francesco Picollonini (later to become Pope Pius III), the sculpture was never delivered.

The depiction of the overly familiar theme of Madonna with the baby Jesus is characterized by Mary’s introverted expression. Her face is remarkably similar to that of the Mary in The Pieta which was sculpted five years earlier. The assumption is therefore that Michelangelo used the same life model. The movement of the child, with its hair sculpted away from the body of the statue and Mary’s robe herald the transition to the Baroque period which emphasized dynamism and expression.

This reproduction of the Madonna of Bruges with Baby Jesus Statue is part of the Parastone Museum Collection. Made from resin, white with subtle grey veins to evoke marble, description card included, and measures: 9″H x 4.25″W x 3.5″D.

As the son of the mayor of Caprese he spent all his time drawing, much to his father’s chagrin. His mother died young and he was raised by a nanny who was married to a sculptor. Michelangelo proved to be so talented that as a fifteen year old he was noticed by the powerful artists’ patron Lorenzo de Medici. His creativity and work ethic were unstoppable. He sculpted two of his most famous works before he was 30: The Pieta and the colossal sculpture of David.

A number of years later, he had made such a name for himself that Pope Julius II asked him to paint the ceiling of the Sistine Chapel. The artist spent four long years painting the frescoes which garnered admiration from all for their emotional expressiveness their terribilita. His ground breaking style was later considered the inspiration for Mannerism. ll Divino was a living legend, the first artist to have a biography written about him whilst still alive. However, he was not a pleasant human. Contemporaries described him a manic, rough, arrogant and sober living, grumpy man, who only lived for his art.

Part of the Parastone Museum Collection of meticulous detailed replicas.