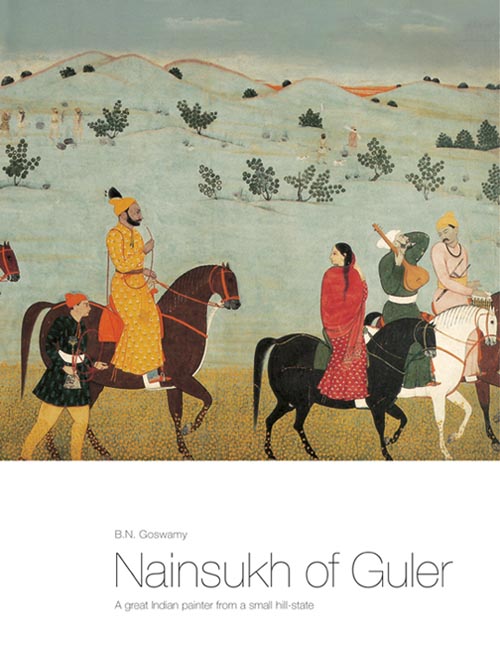 Nainsukh of Guler: A Great Indian Painter From a Small hill-State

:
B.N.Goswamy, distinguished art historian, is Professor Emeritus of Art History at the Panjab University, Chandigarh. His work covers a wide range and is regarded, especially in the area of Indian painting, as having influenced much thinking. He has been the recipient of many honours, including the Jawaharlal Nehru Fellowship, the Rietberg Award for Outstanding Research in Art History, the Padma Shri (1998) and the Padma Bhushan (2008) from the President of India. Professor Goswamy has taught, as Visiting Professor, at several universities across the world, among them the Universities of Pennsylvania, Heidelberg, California (at Berkeley and Los Angeles), Texas (at Austin), Zurich, and the ETH (Federal University) at Zurich. He has also been responsible for major exhibitions of Indian art at Paris, San Francisco, Zurich, San Diego, New York and New Delhi.
Among his many publications are: Pahari Painting: The Family
as the Basis of Style (Marg, Bombay,1968); Painters at the Sikh Court (Wiesbaden, 1975), Essence of Indian Art (San Francisco, 1986); Wonders of a Golden Age: Painting at the Court of the Great Mughals (with E. Fischer, Zurich, 1987); Pahari Masters: Court Painters of Northern India (with E. Fischer; Zurich, 1992); Indian Costumes in the Collection of the Calico Museum of Textiles (Ahmedabad, 1993); Painted Visions: The Goenka Collection of Indian Paintings (New Delhi, 1999); Piety and Splendour: Sikh Heritage in Art (New Delhi, 2000); Domains of Wonder: Selected Masterworks of Indian Painting from the Edwin Binney Collection (with Caron Smith; San Diego, 2005); I See No Stranger: Early Sikh Art and Devotion (with Caron Smith; New York, 2006); The Word is Sacred; Sacred is The Word: The Indian Manuscript Tradition (New Delhi, 2006), and Indian Paintings in the Sarabhai Foundation (Ahmedabad, 2010).

ABOUT THE BOOK
:
ÃƒÂ¢Ã¢â€šÂ¬Ã…â€œTo trace the life and career of a painter (of the past) in India isÃƒÂ¢Ã¢â€šÂ¬Ã‚Â, as the author says, ÃƒÂ¢Ã¢â€šÂ¬Ã…â€œsomewhat akin to following the course of an earthen lamp on swift waters.ÃƒÂ¢Ã¢â€šÂ¬Ã‚Â The glow is bright and warm, and one can keep it within sight for a while, but things can quickly turn and uncharted
vastness takes over. However, knowing this and going against the prevailing (perhaps even comfortable) state of anonymity that is almost a defining condition of the arts in India, this book concerns itself with simply one painter: Nainsukh. The glow that comes from his work is remarkably bright and warm, and tracing its course, however briefly, yields a very special pleasure. Born ca. 1710 to a family of painters in Guler, a small and little known state now merged in Himachal Pradesh, Nainsukh attached himself for the greater part of his career to an equally little known prince of Jasrota, Balwant Singh. From that obscure corner of the hills, through the coming together of a discriminating patron ÃƒÂ¢Ã¢â€šÂ¬Ã¢â‚¬Å“ a true connoisseur ÃƒÂ¢Ã¢â€šÂ¬Ã¢â‚¬Å“ and a painter of genius, emerged a body of work that is compelling: startling in its freshness and heart-warming in its humanity.
In this book, which is the result of painstaking research spread over many years, Professor B.N. Goswamy has brought together all of NainsukhÃƒÂ¢Ã¢â€šÂ¬Ã¢â€žÂ¢s known or ascribable oeuvre: close to a hundred paintings, painted sketches, and drawings which contain the first flush of his thoughts. Nainsukh of Guler is perhaps the first ever book to appear on a traditional painter of the past in India.
It is a path-breaking work: illuminating in its scholarship and written in a flowing, almost poetic style. Justly, it has received world-wide notice, and has attained the status of a classic.

Be the first to review “Nainsukh of Guler: A Great Indian Painter From a Small hill-State” Cancel reply