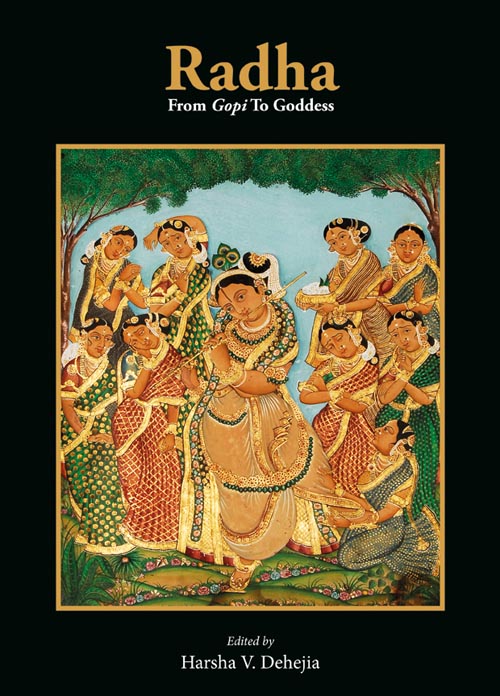 Radha: From Gopi To Goddess

Harsha V. Dehejia has a double doctorate, one in medicine and the other in Ancient Indian Culture, both from Mumbai University. He is a practicing Physician and Professor of Indian Studies at Carleton University in Ottawa, ON, Canada. His main interest is in Indian Aesthetics. A widely respected aesthete and art collector, he has written extensively on Indian art and culture and has seventeen publications to his name,including Akriti to Sanskriti: The Journey of Indian Forms (Niyogi Books, 2009). Harsha V. Dehejia leads a group of scholars who present a heartwarming picture of Radha in her myriad manifestations.

In tracing the evolution of Radha from that of a gopi to a goddess one traverses not only a span of several centuries, but travels through cultural divides, political dynasties and philosophical debates. She occupies a space which moves from the aesthetics of shringara rasa to the theology of shringara bhakti, from the madhurya of Pushtimarg Vaishnavism to the prema of Gaudiya Vaishnavism, taking in its stride the philosophies of Advaita and Dvaita, the traditions of Shakti and Shakta, she takes us from the devotional poetry of Bhaktikal to the courtly poetry of Ritikal and even beyond to the modern poetry of Adhunikkal. Radha is both kamini and ramani, desirable and beautiful, and through her persona we understand the role of kama or desire in the workings of the human mind and especially in the aesthetics of shringara, she is both a gopi and a nayika and through her we feel the presence of Krishna in Vrindavana and the opulence of the Vaishnava
Rajput courts, she is a devi in the temples of the Gaudiyas and through her we are able to worship Krishna, and finally she is even a kalankini or the defiled one and through her we are privy to the folk literature of Bengal and modern middle class psychology of the bhadralok. Radha: From Gopi to Goddess portrays in poetry and painting, dance and drama, sculpture and icon, songs and stories how Radha occupies a special place in sociology and psychology, aesthetics and theology.

Be the first to review “Radha: From Gopi To Goddess” Cancel reply