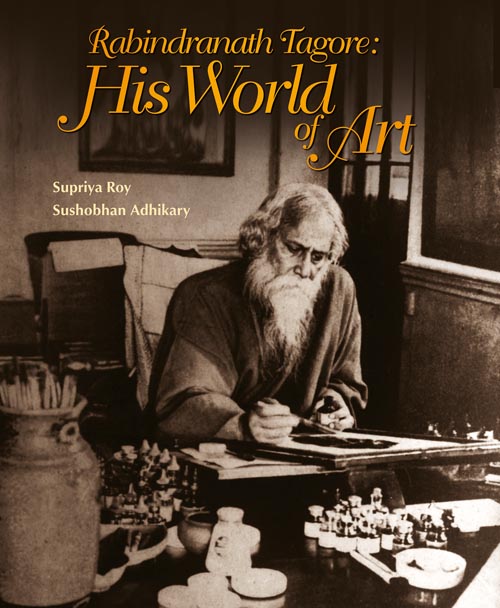 Rabindranath Tagore: His World of Art

Supriya Roy has worked in Rabindra- Bhavana, the Tagore Archives and the
Research Centre of Visva- Bharati, Santiniketan, as a librarian and archivist for three decades. She has been series editor for the Tagore Travelogues for Visva-Bharati and has edited Letters from a Sojourner in Europe, Journey to Persia and Iraq, Letters from Java: Rabindranath TagoreÃƒÂ¢Ã¢â€šÂ¬Ã¢â€žÂ¢s Tour of Southeast Asia, Talks in Japan, A Home in Urbana and The Diaries of Rathindranath Tagore. In 2011,she curated an exhibition on Rabindranath in Kuala Lumpur. Other Indian Council for Cultural Relations (ICCR) exhibitions which have travelled all over the world are Rabindranath Tagore and the Romance of Travel, Pilgrimages to the East and An
Encounter with Japan.

Sushobhan Adhikary, artist, art historian and art-restorer, is at present curator of the Kala-Bhavana Museum at Visva-Bharati. He has spent long years in Rabindra-Bhavana as conservator of RabindranathÃƒÂ¢Ã¢â€šÂ¬Ã¢â€žÂ¢s paintings. Sushobhan has been writing extensively on Indian art and on the art of Rabindranath in particular since 1983. His book, Ronger Rabindranath(Tagore of Colours), authored jointly with K.K. Dyson, was awarded the Ananda Puraskar in 1997. Along with Supriya Roy, he has organised the gallery on Rabindranath in Mauritius and, in 2000, they jointly curated an exhibition of paintings by Rabindranath at the National Gallery of Modern Art, Mumbai.

Rabindranath Tagore: His World of Art is for the general reader who would
like to know more about the multifaceted person that Rabindranath Tagore was. This book deals with TagoreÃƒÂ¢Ã¢â€šÂ¬Ã¢â€žÂ¢s entire world of art, which includes his artistic inheritance, his visual development and his use of colour not only in his art but also in his literature. It also features his work in the context of German Expressionism, his role in the development of a modern art in India, his idea of aesthetics and its introduction into Santiniketan as well as accounts of his exhibitions and his interaction with artists from all over the world. During their work at Rabindra-Bhavana and Kala-Bhavana, the authors Supriya Roy and Sushobhan Adhikary came across information on TagoreÃƒÂ¢Ã¢â€šÂ¬Ã¢â€žÂ¢s art and aesthetics that needed to be documented before it was lostÃƒÂ¢Ã¢â€šÂ¬Ã¢â‚¬Âand that is when they decided to present it in a book, along with relevant photographs.

Be the first to review “Rabindranath Tagore: His World of Art” Cancel reply