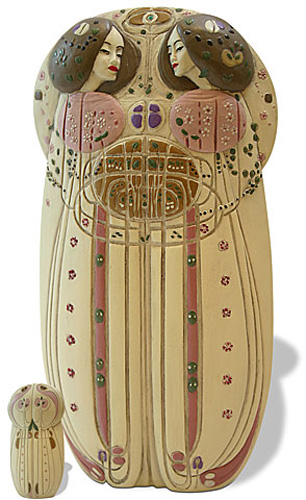 Charles Rennie Mackintosh is a Scottish Art Nouveau artist from the late 19th to early 20th century as part of “The Four”. His works include historical interiors, drawings, and architecture. They emphasize a syncretistic blend of Celtic and Japanese art. Together with his wife Margaret, Mackintosh designed two large plastered panels to decorate the famous Ingram Street Tea Rooms in Glasgow. It was an assignment from the light-hearted businesswoman Kate Cranson, whose Glasgow Tea Rooms became world famous for their advanced architecture and interior design.

The title “The Wassail” refers to a banquet traditionally held at Halloween following the end of the harvest seas. The panels from which this statue adaptation of The Wassail illustrates a repeated patter of two women with ornamental dress. The panels were exhibited at the Eighth Exhibition of the Vienna Secession between 3 November and 27 December 1900.Original artwork is made from oil painted gesso on hessian and scrim, set with twine, glass beads, thread, mother-of-pearl, and tin leaf. Original panels owned by Glasgow Museums.