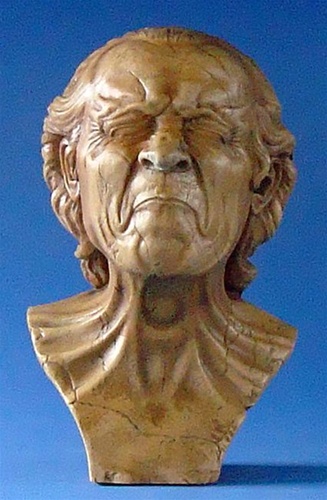 Franz Xaver Messerschmidt (German, after 1770)
The Vexed Man is one of a series of portrait busts or “Character Heads” made by Franz Xaver Messerschmidt, an eighteen-century German sculptor active in Austria. This bust portrays a middle-aged man with a sour expression, which seems to fall somewhere between a grimace and a scowl. The most telling aspect may be the furrowed brow above squinting eyes and a scrunched nose. But natural cracks in the bust’s alabaster surface seem to echo the topography of his skin, both softened by age yet hardened by the extreme expression. The man’s receding hairline, wrinkles, and sagging jaw line contrast with tensed cheek and neck muscles. Although the character seems to express irritation and annoyance, it is not certain whether Messerschmidt intended that interpretation, because he did not give the bust a title.

This bust and the series “The Heads” that it belongs to reflect the intellectual concerns of artists and scholars during the Enlightenment era, when a surge of interest in the sciences occurred. Studies in physiognomy were highly popular at the time. Perhaps as influential was Messerschmidt’s undiagnosed mental condition, which could have been schizophrenia. A contemporary wrote that Messerschmidt told him that by making the character heads, he hoped to ward away spirits that invaded his mind.

Part of the Parastone Museum Collection (Mouseion 3D) of highly collectible figurines based on museum originals. Includes color description card. Made from resin.