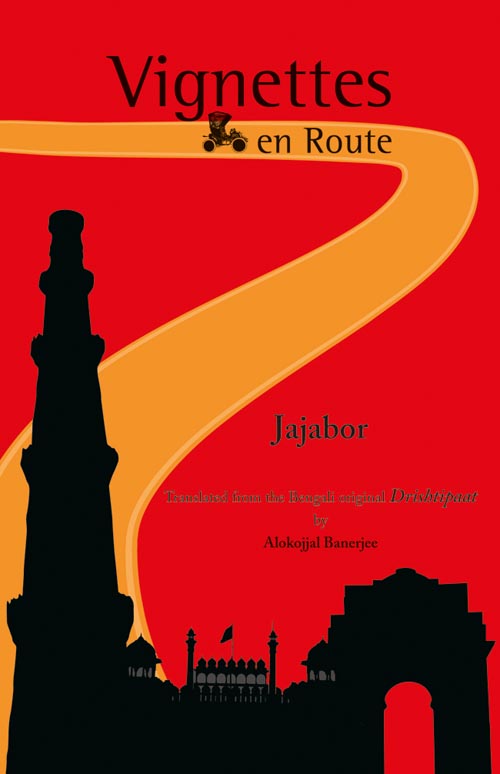 :
Jajabor alias Binay Kumar Mukhopadhyay was born in 1908 and at the age of thirty-eight, shot into literary fame with his very first book Drishtipaat, published in 1946. An Information Officer with the Government of India he was based in Delhi and was peripatetic in nature. He followed up Drishtipaat with another belles-lettres entitled Janantik (1952) and a historical account about Kashmir strife called Jhilam Nadir Tirey(1954). After a lull of seventeen years, he again came out with three more collections of personal essaysÃƒÂ¢Ã¢â€šÂ¬Ã¢â‚¬Â Laghukaran (1971), Hraswa O Dirgha (1973) and Jakhan Brishti Namlo (1983). Jajabor Omnibus was published in 1983.Binay Kumar Mukhopadhyay passed away in 2002 at the ripe old age of ninety-four. Translator: Born in the sixties in Kolkata, Alokojjal Banerjee began his career in the Merchant Navy. Later he taught professionally, worked as an analyst in Marketing and Operations Research and finally joined the State Civil Service. He is now the Deputy Municipal Commissioner at the Kolkata Municipal Corporation. His interests range from Vaishnav literature to philosophy and management.This is his first book of translation.

ABOUT THE BOOK
:
The march towards offices starts at half past nine. At first, it is the run of the attendants. They are turbaned, clad in khaki uniforms, with three or four rounds of red serpentine cummerbund around the waist. A few of them carry in their cummerbunds a small knife with ivory handles inside ornamented sheaths. A mimicry of the castrated guards of the Mughal empire. Those are the attendants to the secretaries or the honÃƒÂ¢Ã¢â€šÂ¬Ã¢â€žÂ¢ble members. They are the major-generals among the ranks of the orderlies. A bundle of files wrapped in a red coarse packaging sits on the carrier of their bicycles, which the sahibs carry home on Saturdays and most of which are returned untouched on Mondays

Be the first to review “Vignettes en Route” Cancel reply