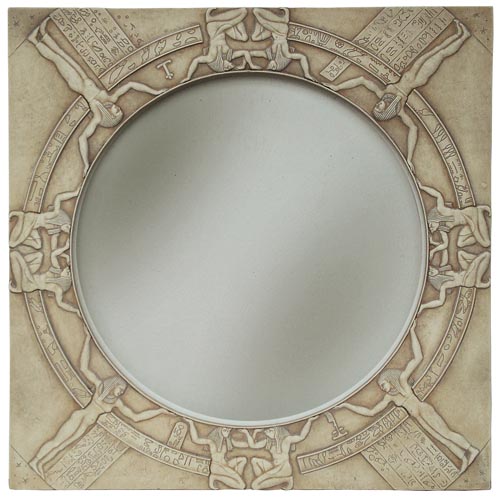 This mirror is based on the Egyptian Zodiac of Denderah originally located at the ceiling of the Denderah temple. This carved Zodiac was so remarkable that the original ceiling was removed and re-erected in Paris. A copy was substituted at the temple.”Â¨”Â¨The Signs of the Zodiac portray a configuration of the stars from around 50 B.C. This is the oldest known representation of the zodiac. The Denderah zodiac integrates ancient Egyptian star-groups with the zodiacal constellations of the Babylonians and Greeks. The astronomical ceiling shows all 12 zodiacal constellations (as well as other constellations, and the planets). The figures of 36 decans, indicators of the hours of the night, are depicted as walking men, snakes, and other animals adjacent to the hands of the supporting figures on the circumference.”Â¨”Â¨The signs of the zodiac are located inside the decan ring and the planets, depicted as Gods holding staffs, and some constellations, are interspersed among them. The zodiac is supported by four human-headed Goddess figures standing erect at the four corners of the canopy of heaven, who are the Goddesses of the cardinal points of the compass, and also four pairs of kneeling falcon-headed deities.

Be the first to review “Zodiac of Denderah mirror” Cancel reply