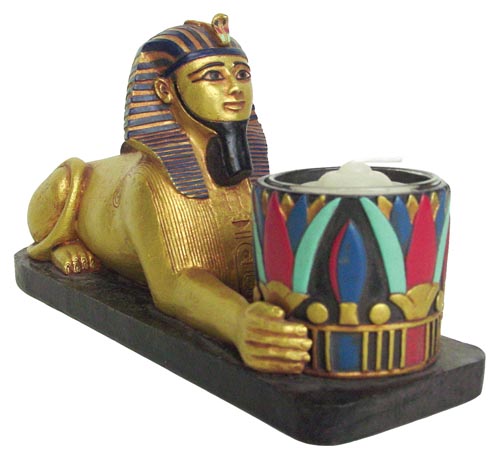 The word “Sphinx” used by the Greeks derives perhaps from the Egyptian Shesepankh “Living Statue”. It designates a type of statue joining a human head to the body of a lion and symbolizes sovereignty combining the strength of the lion with a human intelligence. The Egyptian Sphinx was, with only a few exceptions in representations of some Queens of the Middle Kingdom, shown as male. Also, the Egyptian Sphinx was viewed as benevolent, a guardian, whereas the Greek Sphinx was invariably malevolent towards people. The Sphinx was the embodiment of royal power often shown smiting the King’s enemies, or the King himself being represented as a victorious Sphinx trampling on his foes. This Sphinx represents King Thutmosis III wearing a striped “Nemes” head cloth protected by a Uraeus and a false beard.