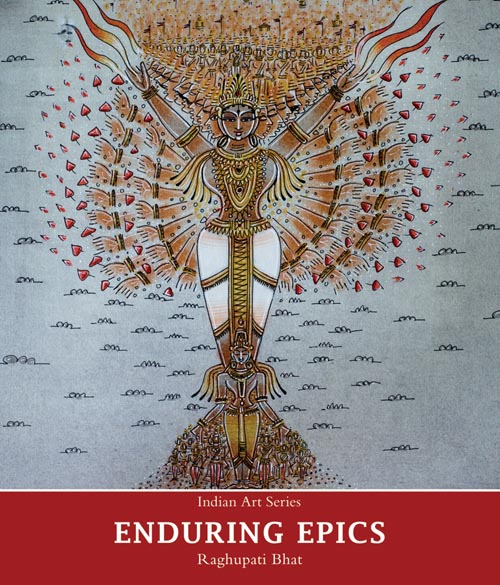 Raghupathi BhatÃƒÂ¢Ã¢â€šÂ¬Ã¢â€žÂ¢s drawings and paintings appear in a meditative streak and petite renderings. They bring alive the pantheons, characters and episodes from Ramayana, Bhagavad Gita, Upanishads and other works of classical and folk literature. The artistÃƒÂ¢Ã¢â€šÂ¬Ã¢â€žÂ¢s fascination with nature comes through in compositions featuring layered imagery- flora and fauna, the sun and the moon, and other cosmic symbols alongside mythological characters. Large crowds are featured within a small space of paper in austere but effective sketches some in pen, others in a subtle palette made out of organic material. An expanse of Ganjifa work, (intricate paintings on small playing cards), have earned him the honorary title Ganjifa Raghupathi Bhat. He has mastered the art of painting metaphysical themes in stick figures with sharp pointed features as against the traditional highly ornate voluptuous forms. The artist is based in Mysore and is currently working on the restoration of old paintings in the Palace there.

Raghupathi Bhat, born in 1957 at Udupi, grew up in the precincts of the temple city where his father was a priest. Given the financial constraints faced by the family, he went to the school at Nagamangla, a village near the forest, where his sister lived. But he did not enjoy studies. With his passion for art, he joined the Karnataka Chitrakala Parishath to study Art and then an institute at Kottayam to master the techniques of mural painting and working with natural colours. His art-scape is inundated with mythological narratives and icons inspired by the temple sculptures that dot southern India. Chanting mantras, he makes his own colours with natural materials and draws and paints myths and stories based on his readings and discussions with various scholars, though has also painted on some non-religious themes. Credited with the revival of Mysore Ganjifa paintings, he has earned the title of Ganjifa Raghupathi Bhat. His work has been exhibited in shows across India and has also been featured internationally in exhibitions at London, Hague, Tokyo, Osaka, Ottawa, and Tunisia. Awards that have come his way include Kala Puraskar, Pariyaya Mutt, Udupi and Dr Raj Amogha Nagarika Award. His work is held in various collections, including the Victoria and Albert Museum in London and at the Palace Museum in Mysore, where he has been restoring some of the old work and also guiding a group of 50 young artists in restoring old wall paintings using mineral colours and traditional techniques. A member of various advisory committees, his work has also been featured in various publications. The artist lives in Mysore in a house of his own design, featuring an image of the Sun God and inscribed with 24 Gayatri mantras. He works from his studio in the city.

Be the first to review “Enduring Epics” Cancel reply