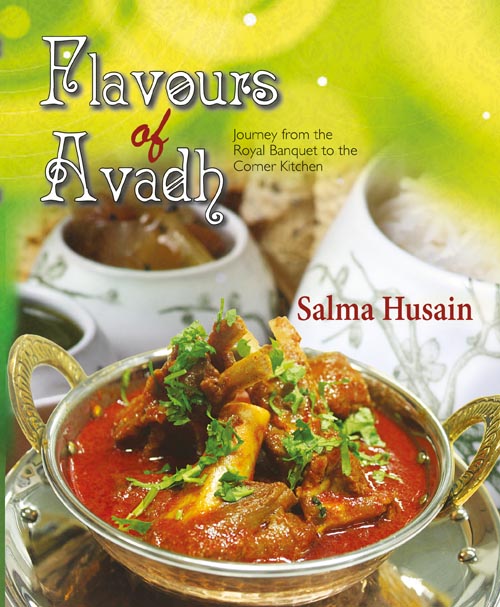 Flavours of Avadh: Journey from the Royal Banquet to the Corner Kitchen

Flavours of Avadh: Journey from the Royal Banquet to the Corner Kitchen is the story of food and cooking from the palaces to the pavement.

The book charts out a unique socio-cultural route down the decades, sketching out an exclusive regional food history, richly coloured with family anecdotes, local festivities, regional culture and dining traditions. There are more than sixty recipes collected from the elite homes and kitchens where this unique and traditional cuisine has been nurtured
over centuries.

The food court of the Avadh region of north India, with its capital Lucknow and the cityÃƒÂ¢Ã¢â€šÂ¬Ã¢â€žÂ¢s unique culture nestling amidst the emerald green Gangetic plains, is a sprawling and a diverse one. High sophistication, a rare tradition of etiquette and well-defined social customs outline the flourishing regional cuisineÃƒÂ¢Ã¢â€šÂ¬Ã¢â‚¬Âenriched and nurtured by the Sharqi Sultanate of Jaunpur and then the early Mughals between the mid-14th and the early 18th centuries. Aromatic spices, exotic herbs, a rare creative energy and a romantic ideology coupled with a mix of racial traits and customs have produced this exclusive line of food and hospitalityÃƒÂ¢Ã¢â€šÂ¬Ã¢â‚¬Âthe Avadh cult of cuisine.

As proverb goes, even the drinking water of Lucknow tastes different. Traditionally stored in clay vessels in the summer heat and often sipped after adding fresh mint leaves, it changes hue and flavour with the seasons. Offered in tall silver embossed tumblers in winter with a sprinkling of fresh rose petals, the special tradition of serving water spells out the creative passion surrounding the culinary habits of this region.

Salma Husain is a passionate cook, food historian and a Persian scholar; she has used the language in exploring the history of food. Salma has worked with the Star Celebrity Chef Gary Rhodes from London for a British television serial and also with South Korean Television for their series on Indian food. She has appeared on Indian television with her feature Journey of Kabab, which has been telecast by Urdu TV as well. At present Salma is working as a consultant of Indian food with ITC Hotels. She writes articles and columns on food for popular journals and newspapers and has award-winning cook books to her credit.

Salma Husain lives in Gurgaon, Haryana. She enjoys cooking for her friends and does it with great love and passion.

Be the first to review “Flavours of Avadh: Journey from the Royal Banquet to the Corner Kitchen” Cancel reply