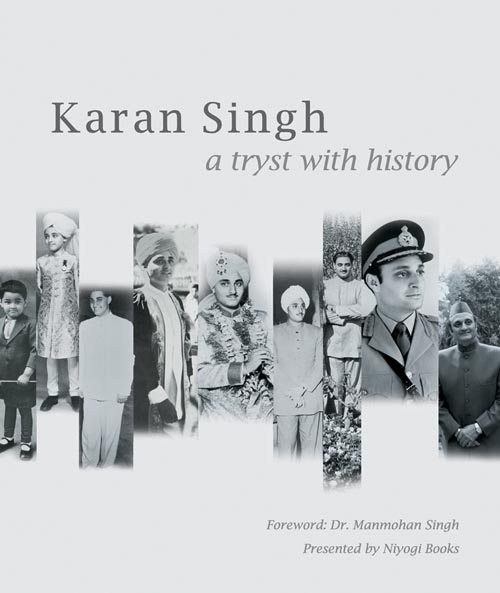 ABOUT THE BOOK
Karan Singh: A tryst with history was born of a series of exclusive interviews, spread over a year, with Dr Karan Singh, a man of exceptional achievements and scholarship. Yuvaraj Karan Singh, the heir apparent to the throne of Jammu and Kashmir, was just 18 in 1949 when he was appointed Regent. For the next 18 years he served the State as Regent, Sadar-i-Riyasat and Governor. Since his early years he was deeply influenced by Pandit Jawaharlal Nehru in whom Yuvaraj Karan Singh found his political mentor, guide and philosopher.
In 1967, Dr Karan Singh was inducted as a member of the Union Cabinet. He first held the portfolio of Tourism and Civil Aviation. In 1973 he moved to the portfolio of Health and Family Planning. In 1979 he was assigned the portfolio of Education and Culture.
A cultural stalwart, an educationist, a revered scholar, he has received several honorary degrees and other awards, including doctorates from the Banaras Hindu University and the Aligarh Muslim University.
An environmentalist and conservationist, he is Chairman of the PeopleÃƒÂ¢Ã¢â€šÂ¬Ã¢â€žÂ¢s Commission on Environment and Development, India. He was also Chairman of the Indian Board of Wildlife and head of ÃƒÂ¢Ã¢â€šÂ¬Ã‹Å“Project TigerÃƒÂ¢Ã¢â€šÂ¬Ã¢â€žÂ¢.
A prolific author, Dr Karan Singh has written several philosophical essays, travelogues and poems in English, besides books on political science and Vedanta, and has been President of the India International Centre, and the Authors Guild of India. As IndiaÃƒÂ¢Ã¢â€šÂ¬Ã¢â€žÂ¢s Ambassador to the United States, he was held in high esteem as a man of many distinguished achievements.
Karan Singh: A tryst with history received the Best Book Award, 2007, in General Category from the Federation of Indian Publishers.