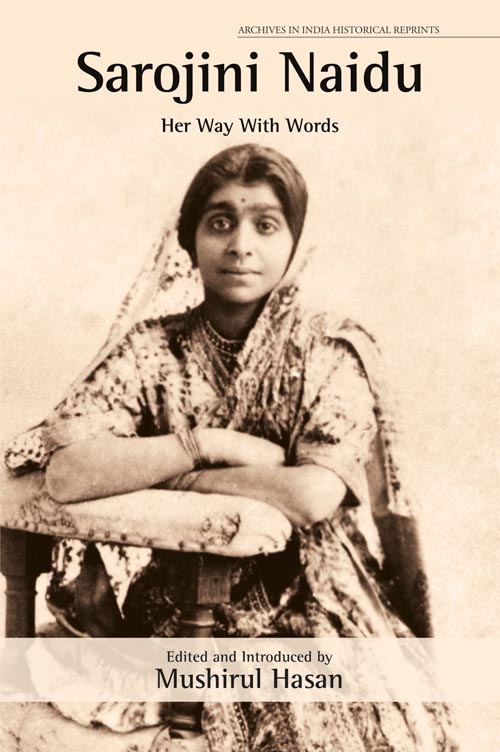 Sarojini Naidu: Her Way With Words

:
Professor Mushirul Hasan internationally renowned historian, prolific author and former Vice-Chancellor of Jamia Milia Islamia University, Delhi. Professor Hasan has also authored Partners in Freedom: Jamia Milia Islamia (Niyogi Books, 2006); Mutiny Memoirs (Niyogi Books, 2009); and The Avadh Punch: Wit and Humour in Colonial North India (2007) and Wit and Wisdom: Pickings from the Parsee Punch (2012) as part of the Punch series brought out by Niyogi Books. He has written extensively on the Partition of India, on communalism and on the histories of Islam in South Asia. Professor Hasan was the elected President of the Indian History Congress in 2002. In 2007, he was awarded the Padma Shri by the Government of India and in 2010 the Order des Palmes AcadÃƒÆ’Ã‚Â©miques was conferred upon him by the French Government. He is presently the Director General of the National Archives of India.

ABOUT THE BOOK
:
Freedom and freshness of outlook gave Sarojini Naidu the astonishing insight to see the significance of compositeness in Indian history. In 1906, at the age of 27, she introduced an amendment at the Indian National Conference substituting ÃƒÂ¢Ã¢â€šÂ¬Ã‹Å“IndiaÃƒÂ¢Ã¢â€šÂ¬Ã¢â€žÂ¢ for ÃƒÂ¢Ã¢â€šÂ¬Ã‹Å“HinduÃƒÂ¢Ã¢â€šÂ¬Ã¢â€žÂ¢. It was carried.
In sharp contrast to the prevailing orthodoxies, intolerance, and religious dissension, the Golden Threshold was a haven of liberalism and enlightenment. She projected the ÃƒÂ¢Ã¢â€šÂ¬Ã‹Å“modernÃƒÂ¢Ã¢â€šÂ¬Ã¢â€žÂ¢ face of Indian womanhood -confident, assertive and politically motivated.

Be the first to review “Sarojini Naidu: Her Way With Words” Cancel reply