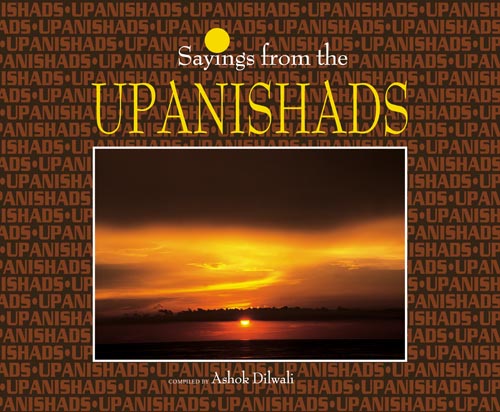 Sayings From the Upanishads

:
Ashok Dilwali has mastered the art of capturing Nature in its various moods from the turbulent to the sublime, with his lenses. Every manifestation of Nature is for him, as for many of us, a divine creation. He presents Nature in a form and style unprecedented. Dilwali has been regularly holding photography exhibitions and has won two gold medals in the International Photography Competitions in Austria (2005 and 2006). He also received the third prize in a photography competition held in USA in 2002. He has more than a dozen books to his credit.

ABOUT THE BOOK
:
The Upanishads are said to be divine revelations received by seers and saints. They not only shaped Hinduism but also influenced the thought of several other spiritual leanings. According to Valerie Roebuck, ÃƒÆ’Ã‚Â¢ÃƒÂ¢Ã¢â‚¬Å¡Ã‚Â¬Ãƒâ€¹Ã…â€œProbably at least half the people in the world have been affected in some way or the other by the ideas of the Upanishads. The knowledge in the Upanishads is not aimed at material gains or even intellectual satisfaction but at enabling one to become free of worldly sufferings and limitations; to attain fearlessness, and to dig up the supreme treasures of the mind. The Upanishads attempt the emancipation of the individual soul from the bondage of ignorance.
Sayings from the Upanishads attempts to help us gain true knowledge leading to infinite joy. Purification of the mind and body by clean and light food, self-control, detachment, active practice of all virtues and meditation on the Supreme Being during life and deathÃƒÆ’Ã‚Â¢ÃƒÂ¢Ã¢â‚¬Å¡Ã‚Â¬ÃƒÂ¢Ã¢â€šÂ¬Ã‚Âthis is the path that the Upanishads propose to the seeker of truth.

Be the first to review “Sayings From the Upanishads” Cancel reply