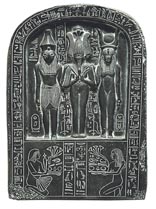 This sculpture was dedicated to the great triad of Horus, Osiris and Isis, who appear in the upper panel, with Titiaa, high priest of Amun, and his wife Aoui kneeling below to offer gifts of fruits and flowers. Osiris wears the Atef crown and carries the royal crook and flail, while his son Horus is represented as a falcon-headed man, Isis has the cow’s horns and the sun disk that she adopted from Hathor in the New Kingdom. Osiris was the God of the underworld and resuscitation while his sister and wife Isis was considered the symbolical mother of the Pharaoh and was worshipped as the “Great of Magic” and regarded as the “Eye of Ra”. Their son Horus is traditionally considered the first Pharaoh of Egypt and at later times, the spiritual king where the Pharaoh is only his representative on Earth.

Be the first to review “The Sacred Triad” Cancel reply