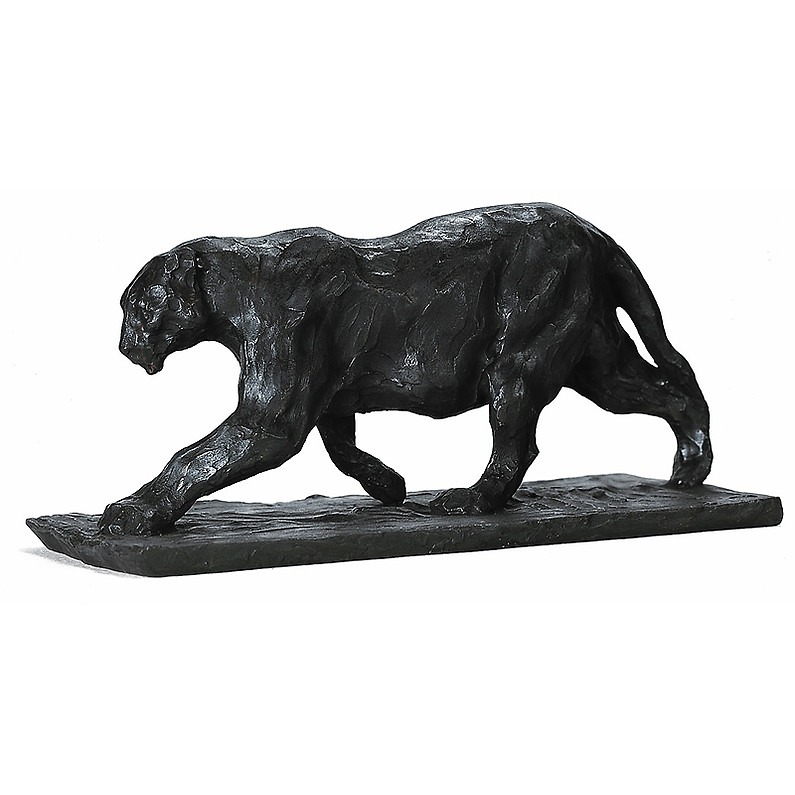 Original Work : Walking Panther, bronze circa 1904
Rembrandt Bugatti (1884-1916) – M. Desbordes gift in 1980
Paris, musÃ©e d’Orsay
Rembrandt Bugatti’s rich and precocious career was unfortunately short: his talent was discovered when he was only 14. He committed suicide in 1916 at the age of 30.
He was born in a family of artists. His father, Carlo Bugatti, is the famous furniture creator; his uncle is the painter Giovanni Segantini and his brother Ettore will become the well-known car manufacturer.
Very early, young Rembrandt studies drawing, modelling, wood- and metalwork. One day in 1899, his father and his friend, Paolo Troubetzkoy the sculptor, discover in the workshop a small group made of clay representing a farmer leading three cows. Rembrandt made it and hid it under a damp cloth… Stupefied by his talent, Troubetzkoy sends him to the Brera Art Academy of Milan.
His father’s settling in Paris in 1904, when he was only 19, allows him to visit regularly the menagerie of the Jardin des Plantes: the animals will become his models. Full of admiration, the founder A.A. HÃ©brard proposes to produce his animal sculptures in bronze. In 1904, he exhibits for the first time rue Royale, in Hebrard’s Gallery. In the following years, Rembrandt continues to show his creations in this gallery.
1907 will be a turning point: the Royal Society of Zoology of Antwerp invites him “in residence”. He can unrestrainedly work in the most important zoo of Europe, exhibit his works and sell them at the same time. In spite of difficult living conditions he will stay there till the First World War. A small room, a damp workshop, long stays in the open air to sculpt the animals afflicted him with tuberculosis, diagnosed at the end of 1909. In 1910, his works meet an immense success in Antwerp and with HÃ©brard’s support he is awarded the Legion of Honour: he is only 26 years old. But he suffers from depression: His only comfort is the zoo where he stays all day long.
The war breaks out. Being a foreigner he cannot be mobilized and joins the Belgian Red Cross as a stretcher-bearer in the zoo. But he is too weak to stand the horrors of war: he flees to Paris, settles down in Montparnasse and sculpts a Christ on the Cross. On Saturday, January 8th 1916, he arranges his death. He is found dying on his bed, poisoned with gas, breathing his last at Laennec hospital.
His artwork based on observation, simplicity and elegance still meets the same success. Along with FranÃ§ois Pompon he is the greatest animal sculptor of his time. In 1920, a posthumous retrospective exhibition presenting 125 works takes place in HÃ©brard’s Gallery. From 1947 on, the Antwerp Zoo rewards animal sculptures with the “Bugatti Prize”. Many books and exhibitions are dedicated to his work. His niece, L’EbÃ© Bugatti, donated an important collection of original plasters to the MusÃ©e d’Orsay. His works are also presented in the museums of Lyon, Roubaix and Vernon.